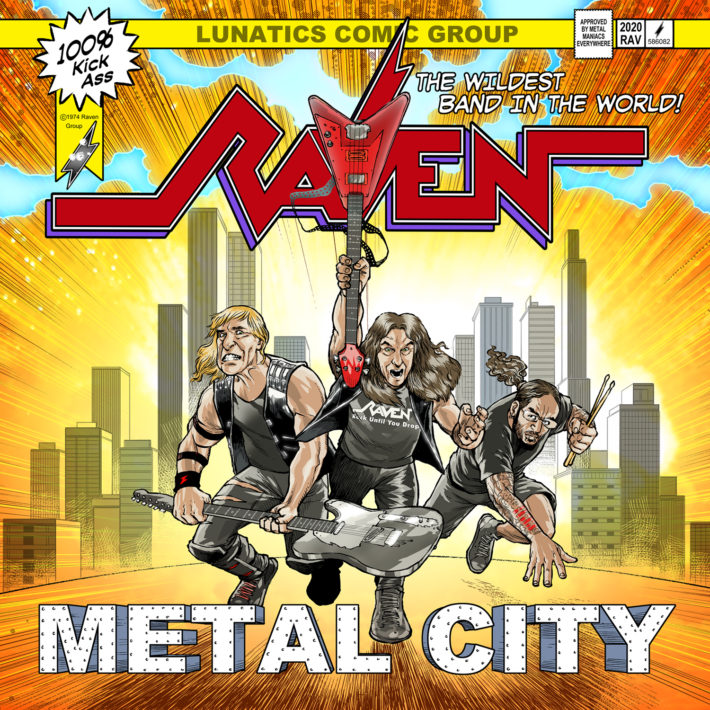 Death is an inevitability. It’s just a fact of entropy: The universe as we know it will eventually die, and everything inside will die along with it. Some things die a lot faster than others, though. New Wave of British Heavy Metal (NWOBHM) slathered with cheese may not be dead yet, but it has seen healthier days. Raven is trying to bring this genre out of the nursing home and back to a more energetic state.

Raven is a three man traditional metal band from Great Britain. They were formed in 1974 and released their debut in the early 80s, so this isn’t a band trying to capture someone else’s old valor. Their sound teleports the listener back to this time. However, they have not simply stayed stagnant since then, as everything here sounds modern despite the genre.

Throughout Metal City, Raven channel Dio. They channel Judas Priest at their most cheesy moments. This music inhabits a world of tight leather pants, long poofy hair, and glamour. If none of the band members enter the stage on a motorcycle you walk away from the show disappointed. Metal City is this version of the band’s first full length attempt together (although two of the members have been with the band since approximately the precambrian era), but they have obviously spent enough time together for their style to gel.

Like a particularly reckless stunt double, Raven approaches every single track with abandon and with no concern for bodily harm. The result allows Metal City to have the energy that this genre needs to do anything at all. Subtlety finds itself thrown out the window in favor of as many bright lights as this band can muster. If there are any doubts as to that, just look at the cover art again. This approach works. Even when I wasn’t super impressed with individual tracks, their energy was infectious enough for all flaws to be forgiven.

The production on Metal City amazes. Every note pops, and everything seems crystal clear. Dynamically it leaves something on the table-the album ranges from loud to louder, everything else complements the sound that Raven seemingly looked to make. A lot of metal works with more grimy sounds, which, fine. But Raven‘s glitz and glamour approach to their chosen genre definitely needed a different touch and they got it. Thankfully.

All the production accolades in the world would not matter if Raven’s performances underwhelmed. Any concerns in this direction are unfounded. All three members of this group play their hearts out throughout Metal City, and virtuosic passion oozes out of the brightly-lit corners of this creation. Every moment and every track attempts to dazzle the listener, and this constant barrage means that successes come frequently (although it also means that the misses are glaring). Each drum fill makes a case for outdoing the last one, and the various growls, inflections, and attempts at higher-than-wise choruses in the vocals add to the swagger that Metal City needs to survive.

I could continue to have fun with the positives on Metal City, but those misses need to be addressed. The choruses lack the extra sparkle that made Raven’s best peers so legendary. They fulfill their roles acceptably, and that’s about all that they do at times. I enjoyed them well enough, but for Raven to make a truly legendary album, they’ll have to improve their choruses. Additionally, the vocals sometimes stretch beyond their capability. I’m all for ambition and trying to leave your comfort zone, but maybe leave that part out of the final album. This smells like an age related issue, like the singer used to be able to hit those notes and is now in denial. It doesn’t hurt the album too much, outside of being a reminder of one’s own nature of aging and eventual mortality.

Someday, 80s-inspired trad metal will die. But that day is not today. Metal City won’t be remembered as a classic of the genre, but it feels like it belongs on the shelf below. If you need fun, energetic 80s throwback trad metal music, allow Raven to take the stage again. They’ve earned it.