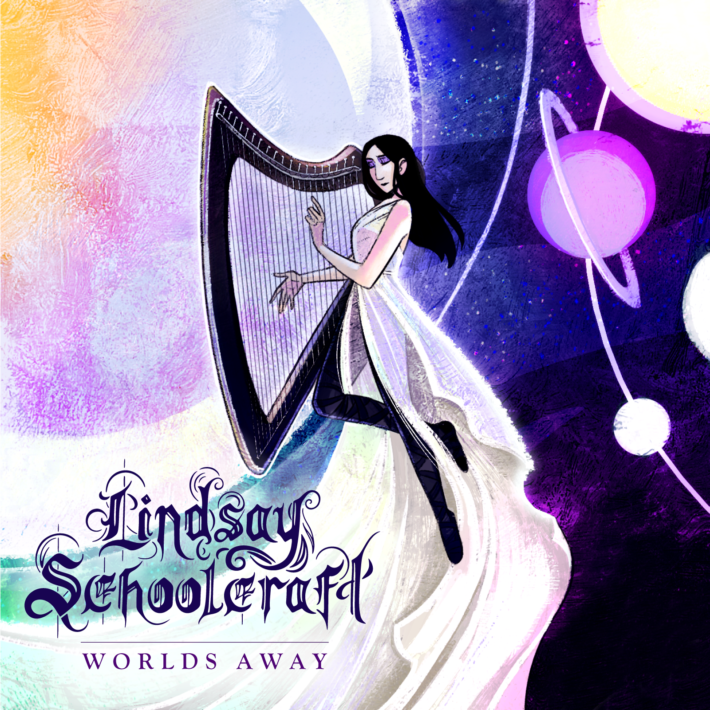 Worlds Away is the new solo album from the now-former Cradle of Filth keyboardist Lindsay Schoolcraft, just one year after Martyr; however, it presents itself as totally different entity then all of her other works.
It is basically a tribute to Schoolcraft’s ten years as a solo artist, but there’s more to it; indeed, except two original songs – the opener and the ending track – the other nine are stripped-down, almost-acoustic versions of songs from previous works of the talented multi-instrumentalist.

It is certainly a promising premise, since it’s not the classic collection of covers and it employs an instrument, the electric harp, that it’s not commonly seen – or better, heard – solo.

Overall the songs and the atmosphere they create are nice. The album was written in lockdown, worlds away from each other, and it genuinely captures the feeling of isolation and the idea of longing for connection, in a melancholic way.
This is a topic that I feel the need to underline, because it’s really not that easy to induce similar feelings without sounding overdramatic and mawkish, yet there’s something here that gets to the point and delivers the intended message. Perhaps it’s the minimalistic tone that avoids meaningless, grandiose arrangements, or the overall quiet, sweet sound, reminiscent of a lullaby; either way, the sheer talent of Ms. Schoolcraft is clearly shown, both as a classical-trained harpist and a singer but, again, most of all in her arrangements.

In fact, Worlds Away is done with little ingredients, so to speak, but all masterfully employed. Schoolcraft’s voice – soft and almost a whisper, compared to the more powerful singing she had displayed in Martyr – goes hand-in-hand with the delicate sound of the harp. The only other addenda are Rocky Gray’s e-drums in the background (the former Evanescence drummer had already appeared on Martyr), film composer Spencer Creaghan’s string work and Dagda on the viola. Overall there’s a very good balance, production-wise; nothing too opulent, just the essential.

So far so good.

The problem with this album is that it doesn’t go much far than this.
It sounds good, it keeps you company when you listen to it and it’s done by one very skilled musician, but… that’s it. It is not something you’d listen to in your daily life, and the non-acoustic versions of the songs are still much more noteworthy. Of course, one might argue that this was never the original intent, and if this album is to be considered as a tribute to Schoolcraft’s career and a display, an experiment with her skills with the harp, then these objectives were reached.
Let’s put it this way – maybe this album won’t have a spot in our usual rotation, but if we’re looking for something to listen to during a cold autumn evening or at nighttime, then Worlds Away is the perfect soundtrack. Right now as I’m writing this it’s raining heavily outside, and I find myself enjoying this album way more than before.
But the fact that still remains it that when I think of Saviour, for example, I tend to remember the Martyr version and not this one.

In the end I’d say that Worlds Away is partial success: while it may not be a particularly noteworthy album per se, it holds its relevance as a tribute to its maker’s career and as a tool for a better understanding of Schoolcraft as an artist, showing a different side of her, worlds away from what we previously knew. Musically speaking, while each song taken singularly might not be that impressive, together they form a very cohesive album whose general atmosphere of somber beauty is easily its biggest strength.