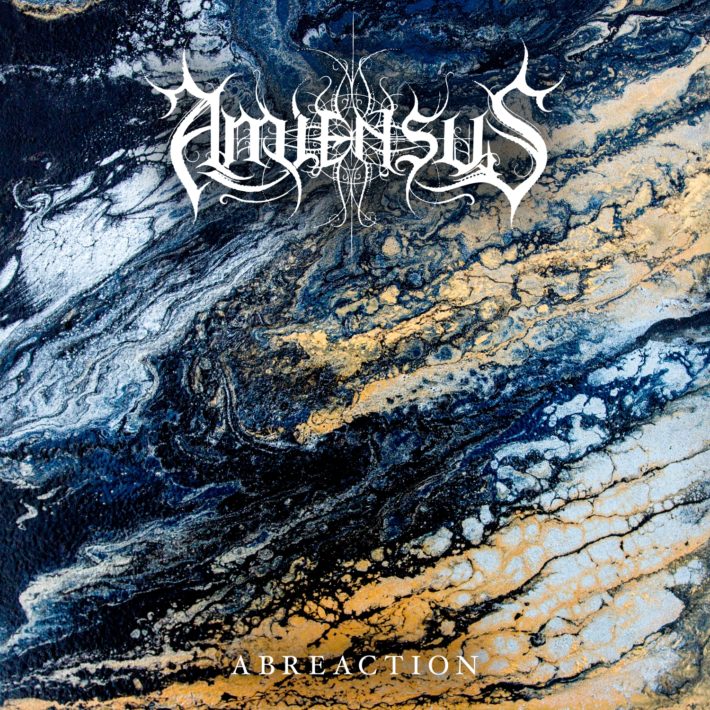 Mistakes kill endeavors far more than good decisions help them. For example, as the old joke goes, if you help a community in many different ways over the years, if you build bridges for them, run for office and help the common folk with your policies, and regularly give to the poor, it only takes one drinking instance of fornicating with a goat for all of your good deeds to be forgotten. Unfortunately that does not mean that avoiding mistakes will bring one success by itself.  Focusing too much on avoiding mistakes can itself be a mistake.

Abreaction is a progressive black metal album with smooth waves and sparkling waters from the Minnesotan band Amiensus. The album misses many of the stereotypes of the genre: the production is pretty decent, gentleness washes in and out of the tracks, and clean vocals lead the way. Despite all of this, Amiensus still play like an extreme metal band, and on this release, their third full length album, they give plenty of bite for those listeners who want it.

That bite captures my attention much less than the glistening softness present all throughout Abreaction. This reminds me of a more subtle Astronoid. Positive black metal seems to be exceedingly rare, so this could just be grasping at straws, but the fundamental musical nature of this release seems like a breath of fresh air in a somewhat stagnant-feeling genre. This obviously doesn’t provide enough purpose for this record to exist, but it starts things out on a positive note.

The riffs and songwriting on Abreaction feel inconsistent, but there are plenty of positives. At their best, they hypnotize and draw the listener into a vast and deep world. No individual riff stuck to my brain all that well, but the feeling that the good ones gave me sure did. Although nothing on this album feels too technically dazzling or difficult, it didn’t need to feel that way to accomplish its goals.

Unfortunately, the songwriting doesn’t stay afloat throughout the whole release. Abreaction contains nothing that sticks out. No riffs, no standout tracks, no instrumental bravado. Everything eventually sinks beneath the muck. With the riffs, this means that by the end of the album, the atmosphere veers away from “hypnotizing” and closer to “lo-fi black metal beats to relax/study to.” While this could be fine, it ends up hollowing out the center of the album, leaving nothing to really drive this record and no reason for this to exist.

I feel like I’m being overly harsh. Despite the issues, Abreaction never fell below a tolerable listening experience, and usually managed to stay above an enjoyable one. Amiensus managed to check off nearly every box for creating a great album. But they didn’t excel at anything. Like a particularly terrible middle manager, I was looking for this band to go above and beyond expectations in some way, and it just didn’t happen. They obviously have the talent to create something great, which is why listening to Abreaction felt less like a good album made by an ambitious band and more like an underachieving album that still manages to create something impressive in those circumstances.

This could have been better, but that doesn’t make it a bad album. Amiensus feel like they are capable of so much more, but this a release that can be settled for. Albums with low ceilings and high floors are always difficult to evaluate, but in this case it doesn’t feel like there’s any real reason to give this a shot unless you’re digging deep for new music or you’re looking for the specific atmosphere that Amiensus have created. This is not some deeply flawed release, but I still left it wanting more. You could do a lot worse.