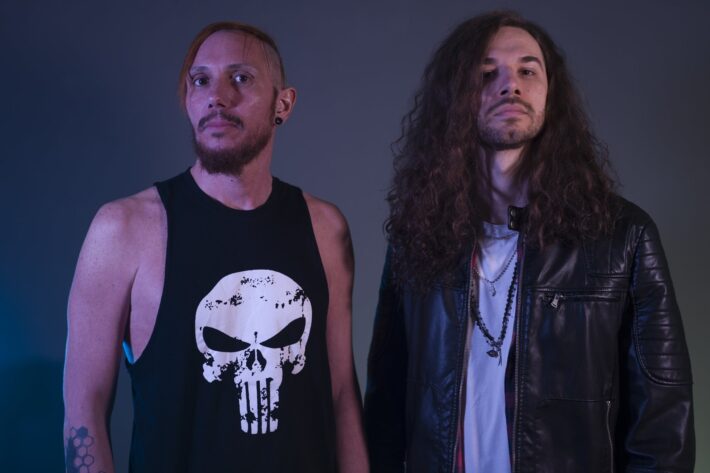 I had a chat with progressive masters Gianluca Ferro (guitar, bass and programming) and Paolo Caridi (drums), who released their first album together, “Cosmic Dead Ringers”, about two months ago.

Hello, this Rick. Who am I talking to?

You two met in November 2018 at SHG Music Show in Milan, and decided to do an album together. How was it like, and what sparked this idea, precisely?

P: Yes exactly, the idea of ​​making an album together was born in November 2018 at the SHG Music Show where both Gianluca and I had to perform. In a break between one performance and another we catched up at a bar eating something and we started talking about various things together with a close friend of us and great guitarist Gianni Rojatti.
And he, looking at us, said: “Hey guys let me tell you… you two have to make an album together”. Boom!
I’ve always had great admiration for Gianluca and I consider him an exceptional guitar player, truly one of the absolute top! So we started working on what became “Cosmic Dead Ringers”!
G: Yeah we know each other since a long time and we really wanted to collaborate a some point but we actually started developing the project after that chat with Gianni. He was absolutely convinced that Paolo and I were a perfect match. We both are into modern metal, compex times signatures and at the same time we love fusion and experimentation!

On this record you went for a very atmospheric approach, mixing modern metal with progressive and jazz influences. Who, and what, were your biggest inspirations while writing this album, both musically and thematically?

P: As for me, when I compose and work on a production, at first I try to play completely free and in the most natural way possible. After that I start working more on details, dynamics, etc.
Probably my biggest inspirations while writing this album were Liquid Tension Experiment and Rush mixed with Fusion music with a hint of Djent!
G: For this album I was looking for some really punishing riffs rather than technical. I kind looked back at my 90’s roots, definitely there’s some Messhuggah into it but there’s a lot of Deftones, Pantera and Tool as well. As for the fusion stuff I think there’s a bit of Allan Holdsworth, bands such as the UK or Soft Machine! There’s also some cinematic interlude, some sort of horror sci-fi ideas mainly inspired by movies.

“Cosmic Dead Ringers” is an instrumental album, featuring mainly drums and guitar and a bit of additional keyboards. Why did you decide against having a vocalist?

P: I have nothing against singers, hahaha! But after so many years I really wanted to go back and release an instrumental album where I can experiment without limits. It’s really inspiring.
G: Yeah same for me, with fingers, you know, you gotta find the right guy or girl! The problem is everything you write is going to be completely influenced by the vocalist and if you don’t have the right voice you are probably going to have a problem! With instrumental music there’s room for everything, it’s more abstract and you can freely move away from conventions, there’s a lot of space to fill with whatever you feel right, also it’s more subjective to the listener, I suppose. Being so abstract there’s more room for the listener’s imagination!

You both are teachers, studio musicians and live performers – what’s your favorite part, the one you enjoy the most? And, on the other hand, what part is the most stressful?

P: This is indeed a difficult question… I think all three of these situations have very different aspects. Playing live gives you sensations and emotions that you don’t feel anywhere else, that’s why it’s something magical and unique.
Working as a session drummer in the studio is one of the things I love most. I’ve been lucky enough to record many albums as a session man and every time it’s a new experience where you always learn something different.
Being a teacher is not easy at all, you have a lot of responsibility towards your students but at the same time a lot of satisfaction in seeing how they can grow and improve as drummers following your advice.
G: Playing live is the most fun for sure! Live is my thing but there’s someting special in teaching especially when you come across a talented student. Nowadays I’m teach mainly composition and arrangements; I have some students that are not guitar players but vocalists, drummers, piano players and I love to dig into the craft of composition, from classical stuff to electronic. That’s a totally different kind of fun! As for the studio I’m producing a lot of stuff, that’s again another creative side and I spend the most of time in the studio. You know what music is a bit of all that stuff it’s like different faces of a diamond!

You also have both participated in numerous projects with different musicians. Was recording a solo album all by yourselves much different from what you are more used to do?

P: Personally I don’t feel so much difference, except that when you produce your own album you also have to take care of all the aspects that go beyond playing and recording.
G: Yeah totally different! In a project like this I have full control and maximum creative freedom, but sometimes is cool to not have all this responsability and try to fit into others people perspective,
like the Lovekillers feat. Tony Harnell record which was basically an AOR album! I feel more comfortable having creative control though!

Do you feel this is a one-time thing, or do you believe this project will have a sequel?

P: I am absolutely sure that there will be a sequel! Gianluca and I have a fantastic relationship and a great musical understanding. We share lot of ideas and visions and I don’t hide to you that I can’t wait to write new material!
G: Yeah we are definitely going to write new music probably starting from December, that was our idea form the start, it’s not going to be a one-shot project but a proper band!

This is obviously not the time, but do you see yourselves ever playing this album live?

Thanks a lot to Paolo and Gianluca! “Cosmic Dead Ringers” was released on October 9th and it can be found on Spotify.