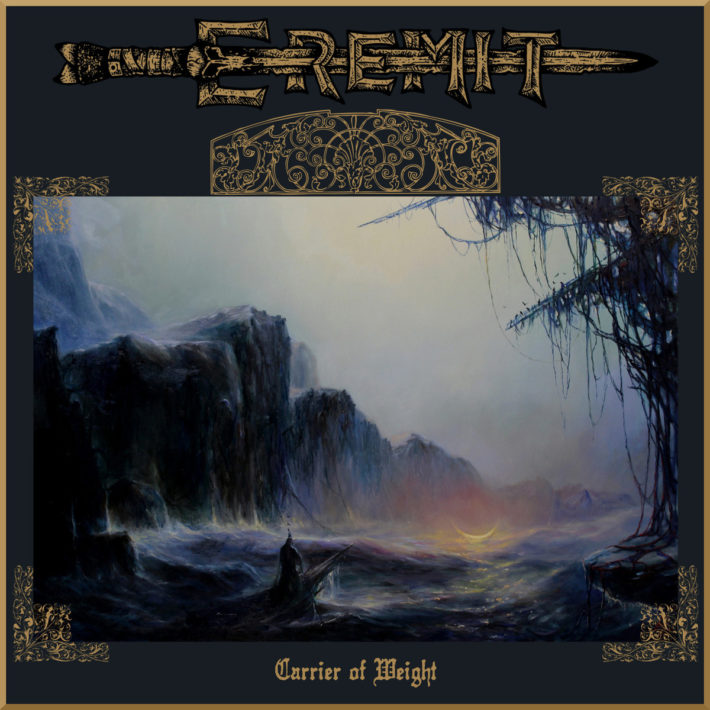 The 25th of February, when winter’s end is nearing, Eremit, band from northwest Germany, releases their first full-length album, Carrier of Weight. It’s an extremely heavy record that lasts over an hour, but consists of only three songs. The first of which lasts 23 minutes, the second one is the ‘shorter’ one with just over 11 minutes and the last song is a whopping 33 minutes. These durations, together with the slowness of the music, had me under the impression that it was a funeral doom record. However, after listening to it a few times, I noticed it leaned more towards sludge/doom than funeral doom (I’ve got to admit the Metal Archives helped me with this conclusion ;P). A lot of specific moments, as well as the general sound of the album, really reminded me of Monolord, except for the fact that Eremit is actually even heavier and slower than the former. Even though the songs are lengthy, they aren’t too long-winded. The music is groovy enough for the listener to be carried away by the music and every track has a good structure with buildups and different parts, keeping it interesting. When you put on the record, you get drawn into a universe where time stops and there’s only heaviness, and only when the album stops, you realize the music has got you in some sort of trance and you’ve been somewhere else for the past hour.

Dry Land opens the record with an atmospheric intro. The pulsating synths create an otherworldly reality in which the band starts building up their music. First, there’s a slow guitar riff creating tension with a melody that’s to be the main theme of the song. After a while, the drums and bass guitar join in and on top of those, there’s a creaky, low voice to be heard. This is just one of the types of vocals Eremit has to offer. Only after about three and a half minutes they prove they’ve got more to offer when it comes to vocals, when the music explodes in its full intensity and a deep, low grunting voice and a higher, more pinched-like voice alternate in a sort of call-and-response format. The different types of vocals really express different types of emotions throughout the album, ranging from anger to agony to a general tiredness of living.

Even though Froth is Beckoning is the faster track on this record, it doesn’t lack heaviness. Because of the faster rhythm it might even be catchier. Instead of a slow drum beat with hi-hat and cymbal fills like the other songs, on this one, Eremit shows a different, more ‘upbeat’ type of drumming (if you can use the term ‘upbeat’ for doom metal ;P). In order to show they’re still a sludge/doom band, the rhythm changes about halfway through the song, creating a slower and heavier version of the track.

Cocoon of Soul has a really winter-like feeling to it. The song starts with the sound of creaking ice from melting glaciers, immediately creating a cold atmosphere. On top of the guitar melodies and soft drum beat there’s a type of howling sound from the synths that remind of a cold wind blowing over the winter landscape. On this track, there’s another type of vocals to be heard, it kind of sounds like the singer is inhaling while speaking, giving the vocals a really non-human feel. The only thing that bothered me a bit about the album is the tempo changes in the final track. The minimal increase in tempo per measure sounds a bit awkward, because to me, it makes it feel like every measure is just a bit rushed. The actual change to the faster part of the song also sounds a bit clumsy, but it’s only a minor demerit, for the rest of the song (and complete record) is actually really good.

In conclusion, Carrier of Weight is an extremely heavy, slow and intense album. Its exceptionally long songs prove the band’s skill in building up their songs as well as keeping them interesting. There’s a lot of diversity in the vocals, expressing a different type of emotion with each variation. The fuzz of the guitars, together with the general grooviness of the record remind of Monolord, but Eremit still has their own sound. So with winter coming to an end, I recommend coming out of your Cocoon of Soul in which you’ve been hibernating and giving this record a spin, ’cause it’s definitely worth it!