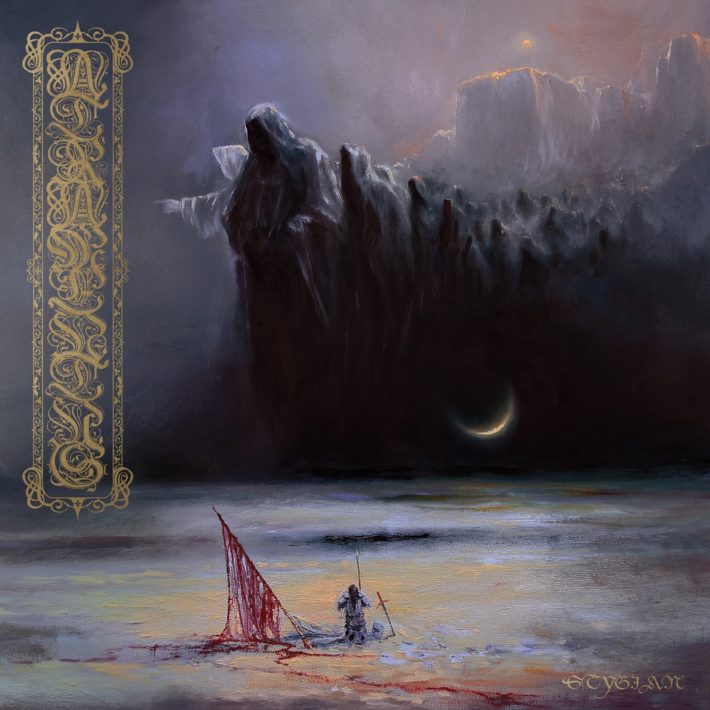 Just like how everything’s bigger in Texas, everything’s longer in funeral doom. Tracks routinely spill over the ten minute mark, occasionally laugh as they breeze past the twenty minute mark, and rarely move above a beat per second while doing so. Atramentus take this to a ridiculous extreme: Even the interlude on their album lasts almost five minutes. Not content to make their music stretch on forever, they stretched out an album’s typically release cycle to the breaking point, taking around eight years to put the finishing touches on their new album Stygian. Is Stygian worthy of that time, or of the incredible Mariusz Lewandowski cover art? Yes, but like everything funeral doom related, there are caveats to that which stretch the answer far beyond what three letters can hold.

Stygian is the debut funeral doom release from Canadian band Atramentus. They play the genre pretty straight: there are long, stretched out passages, howling and guttural vocals, and a gelid wind running through both the lyrical subject matter and the musical tone. This is not a minimalist band, so there are plenty of tools and sound effects to aid Atramentus on their epic and hefty tracks.

Atramentus lean into the heavy side of the genre. Because funeral doom in general and Stygian in particular tend to be quite slow, every note needs to count. The band is careful to give every pulse of every track the weight it needs to land on the listener’s chest like a rock on Giles Corey. The effect doesn’t always work, which is sometimes quite noticeable-when the drums are absent for a few seconds followed by a crashing, supposedly impactful resolution, but the heaviness is missed, it’s like those rocks turn to foam. The intent is enough, though, as even those missed chances provide a cohesive sound to the music. Stygian shouldn’t be listed among the heaviest, most crushing funeral doom albums, but the effect still creates good moments.

Some funeral doom albums have direction, some just wallow in their atmosphere. Stygian eventually finds its way to a resolution. As with other aspects of the music, the building elements of this album don’t quite hold their own against the titans of the genre such as Slow‘s VI: Dantalion and Esoteric‘s Paragon of Dissonance, but taken as its own experience there is a lot to like here. I left the album feeling as if it was a complete experience and did not want more.

Stygian is not entirely sunshine and roses, or rather despair and brutality. There is bloat here. The second track is completely wasted. It sounds like it\s supposed to be an atmospheric interlude between the two large tracks, but instead serves to destroy any momentum and goodwill that the first track built up before the second one. Interludes in all types of music, from rap skits to half of Tool‘s discography, tend to range from useless to annoying. Atramentus does not buck the trend. The two longer tracks are not free from this bloat either, as they both lose their focus and shine in multiple prolonged places. Not a major crime, but still worthy of a citation.

Stygian also does not have enough going for it to rise to the heights of giants. There are mitigated weaknesses and passages that are just fine or satisfactory all throughout this release, but there is nothing that brings Stygian to the next level. It does everything I need to be happy with the time I spent listening to it and really nothing more.

Ok, that’s enough nitpicking. Stygian was an extremely well-made album that gave all of the morose purging that a funeral doom release should bring. I would recommend Atramentus’s debut to anyone even remotely interested in funeral doom. This won’t bring many new fans to the table, but anyone with an affinity for the sound at all will find a rewarding experience waiting for them. They say that good things come to those who wait. There is a lot of waiting for this album, but it’s worth it.