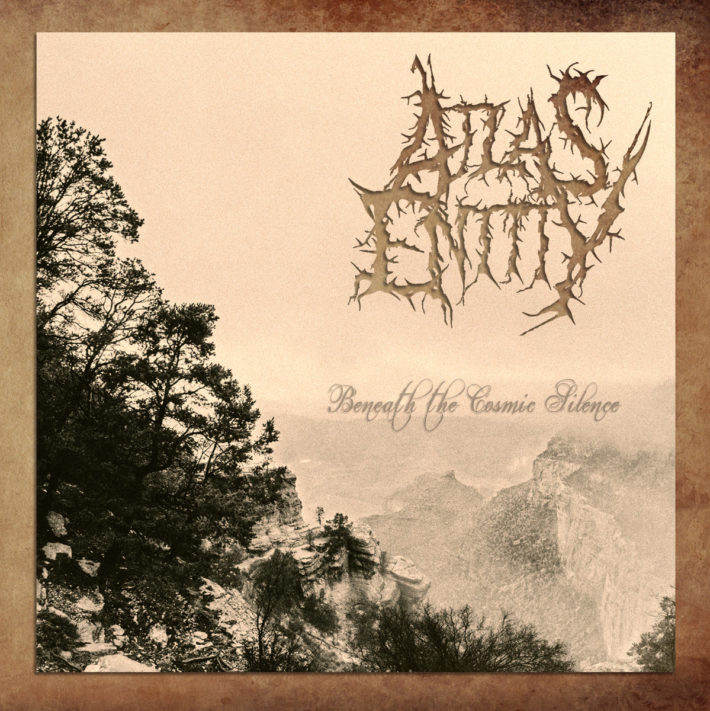 Atlas Entity’s Latest offering, Beneath The Cosmic Silence, brings melody and black metal atmosphere to the world of progressive music. Largely a one-man band, this album features Decrepit Birth member and notable YouTube personality Samus Paulicelli taking up the drums. With lengthy songs, conceptual lyrics, and instrumental proficiency, this album has all the boxes checked for a decent progressive record. But does it stand out?

In true prog fashion, the album starts with a melodic intro followed by a long song split into two parts, “In The Shadow of The Mountain.” With these opening tracks, the black metal influence is apparent. Less so much with blastbeats and unrestrained chaos, but more so with the melodic progression and atmosphere. Every now and again, I keep thinking that “In The Shadow of The Mountain” might have been an Agalloch b-side that Atlas Entity decided to revamp. The two-parter does feel like a journey, like I’m contemplating life’s philosophical questions while hiking through a snow-laden path.

“Murmurs of Dissent” and “Visions of Gold” fill out the heavier end of this album, tapping into some death-metal influence. There were more than a few moments in these tracks that reminded me of prog-era Death. Paulicelli is really able to show off his drumming prowess, his death-metal chops more than adequate to fill this role.

After that, the album goes back to it’s more contemplative state, with more focus on melody and development and less ferocity. “Windswept” a short track that feels like an interlude, with more clean vocals and acoustic guitars transitioning into a well-executed guitar solo, before leading into the chilling “Scorned by Snow” that, once again, could have belonged on an Agalloch record. The final track “Celestial Noise” closes out the album, feeling like it could have been slightly longer.

One of my biggest complaints with this album is the drums. Not because I feel that they are done poorly; Paulicelli does a stellar job. But it almost feels as if he did too good of a job. Every time I listened to this record, it always seemed that he was underutilized. I was excited when “Murmurs of Dissent” and “Visions of Gold” came on, as they were much more aggressive and it seemed Paulicelli got to show off a little, and I wish more of that was on this record. Paulicelli has clearly proven himself to break his death-metal style (as is evident on Empath by Devin Townsend), but comparatively, this performance doesn’t match up.

The black metal influence brings a nice touch to this prog record, but ultimately not enough to stand out. It was one of those albums where I wouldn’t mind if it was playing, but I’m not going to actively seek it out. The musicianship is executed well, the vocals are fine, the songwriting decent, but ultimately not exceptional. Maybe the next album will yield something more intriguing.