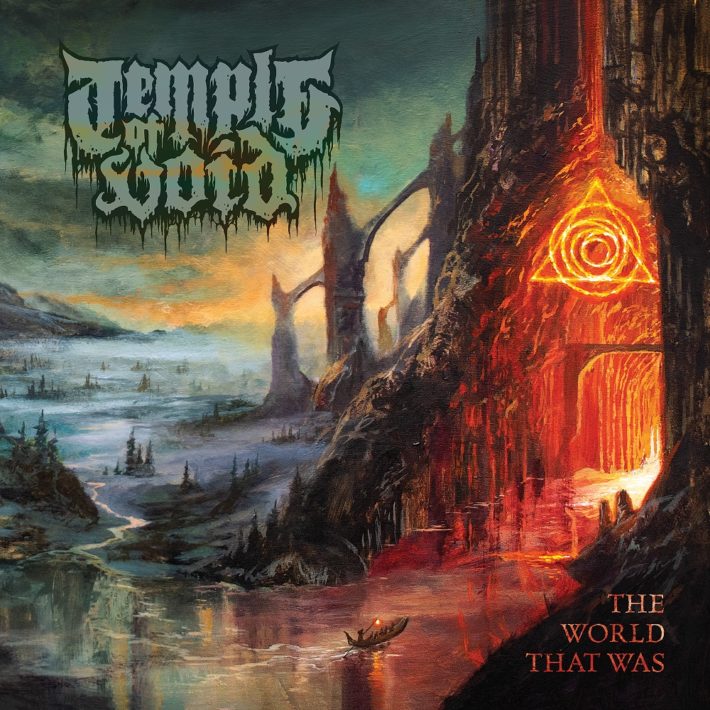 In a lot of ways, it is easy to have strong opinions. Love and hatred evoke many varied thoughts and motivate one to delve deeply into why they feel so strongly. Indifference can be a lot more complicated. Delving into why you don’t have any energy to care deeply at all about something involves pouring effort into said thing, which would already be done if your thoughts were strong at first. Figuring out what to say for The World That Was felt like pulling teeth.

The World That Was is a death/doom album, with a heavy emphasis on the death, by veteran Detroit band Temple of Void. The focus throughout most of the album is on the crushing atmosphere that is only possible in this specific sub-genre. The usual aggression of death metal is replaced with a slow churn that somehow stretches out time even when the pace of the music is actually fairly brisk. Everything is distorted, dark, and depressing. Or at least, everything tries to be.

The first issue with The World That Was is the complete lack of a hook. As far as death/doom goes, it’s competent. However, nothing here is excellent. The riffs are adequate. The vocal roars are adequate. The atmosphere is adequate. But nothing stands out as a strength. Throughout The World That Was, Temple of Void rely on their ability to create a heavy atmosphere, and it backfires on them. Don’t take that the wrong way-the atmosphere is indeed excessively heavy. It’s just that they could have done this in addition to making actually interesting music. When the doomers attempt to add a riff to the mix, the sound at least manages to tread water. But this doesn’t happen enough. Atmospheric black metal is a large enough genre, we don’t need its well-discussed drawbacks to infiltrate the death/doom world any more than they already have.

Even with the riffs,  there is not enough present on The World That Was for itto remain interesting for large portions of time. However, if you are starved for riffs, if your current attempts at social distancing and self-isolation have spread to include death metal as well, the riffs here will do well enough. If you got a concussion and forgot about the excellent The Drowning release from last year, this may be for you.

Maybe I’m being way too harsh on this. After all, as stated, everything here ranges from adequate to adequate. It just feels so disappointing. Temple of Void are obviously good musicians, they obviously put a lot of work into this release, and there are a lot of moments that just barely don’t work for me. It is frustrating to suspect that this could be my favorite album of the month in a parallel universe that is fairly close to ours. Everything is just not quite great, and the entire album folds as a result.

On the plus side, Temple of Void don’t overstay their welcome. One of the typical issues with death/doom is the propensity for artists to decide that a song isn’t really complete until you’ve taken a nap through half of it and wake up extremely rested feeling like you’ve missed nothing. Everything here is concise, whether it works or not. Temple of Void presents their ideas and lets them work or not on their merits, with no attempt at Stockholm-Syndroming you into liking tracks that started before your long-term memory kicked in. Weirdly, the only track that feels overly long is the interlude “A Single Obolus”. Considering one of the tracks pushes ten minutes, this is a significant feat.

It feels like a lot of people will like The World That Was a lot more than I did. For me, all of its strengths were blunted, and all of its weaknesses amplified. You might be more forgiving than I was if you’re craving some well-made doom. There was some stuff to love here, I just didn’t end up loving any of it.