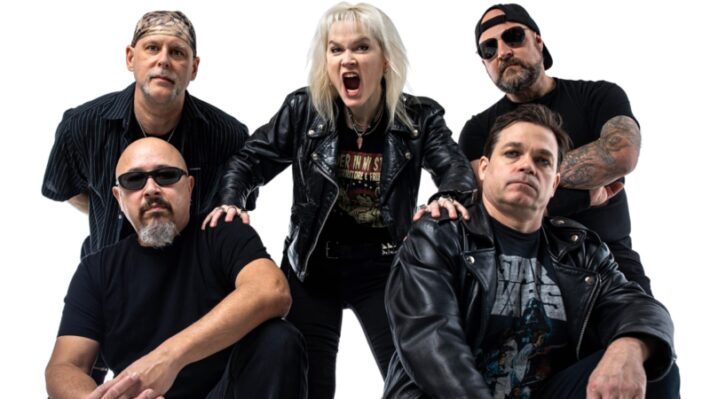 Local heroes Splintered Throne are ready to unleash their next chapter, The Greater Good Of Man. Leading up to the release, I had a Q&A with the band; we talked about their history and their next steps alongside a new singer… with quite the background.

Hi, this is Rick! Who am I talking to, what’s your role in the band?

Jmo: And Jason, AKA Jmo. I play the guitar.

Following the departure of Brian Garrison the band recruited you, Lisa, already known as White Crone. How did you meet each other? What prompted this choice?

Lisa: I had seen Splintered Throne live with Garrison fronting the band a few times, and I was a fan of the band. I saw them open for Flotsam and Jetsam, it must have been 2019, when Garrison announced his departure on stage.

I was there with my friend, also named Lisa, she started poking me in the ribs and saying «you should go talk to the band!». After their set, I happened to see some of the band members sitting in the bar. The bass player Brian Bailey and I struck up a conversation, talking a little shop as I’m a bass player as well, and I asked if they were having auditions. He said yes, and gave me Jason Moser’s card. The rest is history!

Jmo: I remember that show! I remember playing and looking down and seeing Lisa in the front row singing all the words to the songs. I had recognized her from the Portland scene and was surprised she knew them all.
When I saw Brian Bailey after the show and he told me Lisa was interested, I was super stoked. We sent her the tunes for the audition and she came out on one of the two rehearsal days we had set up and she just killed it. Not only did she know the audition tunes, but pretty much our whole catalog.

Funny thing is, I have always wanted to have a metal band with a female singer and now, here we are. That and Lisa is like my sista from anotha mista. We have the same metal upbringing, which makes the writing process super easy.

Splintered Throne debuted in 2006 and since then you’ve built a strong local presence and you have even opened for well-known national acts. What has changed in all these years? What do you say has been your biggest achievement so far?

Jmo: I think the biggest change has been in our songwriting and the approaches to it.
With the old lineup, for the longest time, we all lived close and would write together in the same room during writing mode.

Somewhere around 2013 or 14, Garrison moved to the Seattle area and with him, Fred and I being the main songwriters, it was tough to muster that same chemistry. We managed to massage it out and make it work, which is how Redline came about.
Now, with The Greater Good of Man, I wrote about 90% or better of the music and gave it to Lisa, who came up with just about all the lyrics. Super easy, especially since I had figured out how to remote write and mess with technology.

As far as our biggest achievement, we have been able to be local support for some of our favorite bands, done a few really cool and eclectic festivals over the years, and been able to say that we have been a consistently drawing and relevant regional act for over a decade. I think in this day and age, that’s definitely an achievement!

Lisa: The biggest factor was the pandemic lockdown.  The band used to write as a group, in the same room, however the lockdown had everyone working from home.
Jason is a prolific writer, and had spent his time tracking killer riffs and chord progressions, which he shared with me via Dropbox. I wrote the lyrics and vocal melodies, and tweaked a few progressions here and there to make them fit, all from home in my office. I recorded tracks on my DAW and sent them off, and we would go back and forth with finishing touches.
It was time consuming but it really paid off in spades in the end.

Jmo: Having a similar music background (at least on the metal side) and knowing the direction we wanted to continue to take the band, the songwriting came super easy.
I am from the Hetfield school of playing guitar; it’s all about the riff. Once you have that, you have to have a good song with a hook. Put that package together and tweek a little here and there, and there is a Splintered Throne song.
Lisa makes it easy with having a great sense of vocal melodies and knowing how to sink that hook. I am beyond stoked with how easy we write together.

About the album, I’ve noticed that while no two songs are the same, they all fit amazingly well together; there are also lots of different influences as well, from early Iron Maiden to Ronnie James Dio and even prog elements. Did Lisa’s presence and her blues career bring new elements to the band’s sound? How much has your sound changed over the years?

Lisa: Thanks for the kind words! We’re proud of how these songs make an album, and aren’t just a collection of songs stuck together. I would say my blues career had a lot to do with being able to track from home, and knock things out in the studio. I have a long history of self-producing albums.

However, I try to keep my blues and metal worlds very separate in musical terms. I would say the only place the blues may enter into my vocals in Splintered Throne are when I am emulating Dio in some way.  He was a very bluesy singer.

Jmo: I’m more of a “metal” guy, and always wanted to play in a traditional  heavy metal band.
I think Splintered Throne over the last release, Redline, had kind of strayed from that just a tad, and so I wanted to make sure that 1) We came back to our roots, like The Octagon release; 2) We don’t make an album of the same 8 songs, and 3) We can showcase Lisa in something she hasn’t already done, yet not go way out into left field.

If you strip down the song The Reaper is Calling, it’s actually loosely based a 12-bar blues progression. It just got smacked with some Accept and Helloween on the way in. That is as close to Lisa’s blues on the release that I would offer!

The song Underdogs was inspired by those struggling with addiction and who made it into recovery. Is this a personal story? What would you say is the relationship between the metal community, or being in a band, and addiction and recovery?

Jmo: I’ve been working directly with people in Recovery for close to the last 5 years. Many of these people I have got pretty close to and it is just heartbreaking when addiction wins. That song was inspired by both those who made it, and those who did not. I have mad respect for those who are at least trying, and just ecstatic when they are succeeding.

As far as the relationship between music and Recovery, I think we’ve all seen the stories of overindulgence and the sometimes tragic end it leaves. Wasn’t there a saying back in the day, Sex, Drugs and Rock’n’Roll?? It used to be cool, or we thought it was cool. Now I think it should be Sex, Meditation, and Heavy Metal.

Lisa: I’ve been clean and sober for many years, so singing these words that Jason wrote is very meaningful to me.

Any plans for a tour? What’s a venue or festival you’d like to play at?

Lisa: It would be a dream to play Wacken Open Air, or Psycho in Las Vegas!

Jmo: I just want to get out and share these songs live with some other really good bands, and see people enjoy live music again. I live for the live show. Anytime, anywhere… we hope to get to do that later this year.
Festival-wise: Wacken, Dyanmo, Headbanger’s Open Air, Aardshock, Alcatraz, Keep It True, any European festival we could get on would be rad.

Many thanks to Lisa and Jason and all the other guys in Splintered Throne! The Greater Good Of Man wil be released on August 19th and you can already check out a song on Bandcamp, and on the band’s website. Follow the Splintered Throne on Facebook, Instagram and Twitter and don’t miss any update!