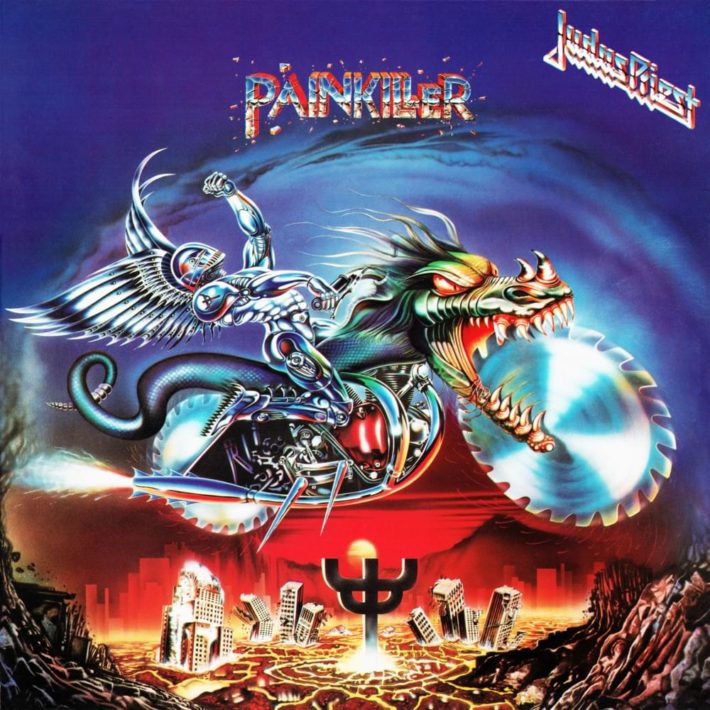 Since its very intro, it’s instantly recognizable.
A seventeen-seconds long drum solo (the proper introduction for the newest member), followed by thunderous riffs and screeching vocals; sweep-picking solos and falsetto, double bass and post-apocalyptic metal-themed lyrics. This is [the] “Painkiller”, opening track of the album of the same name, a song that in 6 minutes sealed itself as a staple of the genre.

This is, however, the whole album too. The ten songs that make up the original tracklist all share the same characteristics and the same sound, making “Painkiller” an extremely cohesive and compact album; at the same time, every song is memorable in its own way and could very well be a live strong point – just like the title track is.
I personally think this is one of the few albums ever made that could be considered all killer no filler: take “All Guns Blazing”, for instance, with its unforgettable vocal intro, the fan-favorite solemn “Leather Rebel” (whose live version is added in the remastered edition), or the anthemic “Between The Hammer & The Anvil”… every song has that something which makes it unique; even the slowest track, “A Touch Of Evil” (second single after the title track) manages to be extremely heavy, thanks to pounding drums and menacing vocals.

“Painkiller” is a shot of adrenaline through the heart, a full-throttle joyride during the night, yet it is accurately build so that it never becomes boring and the listener has a few slower breaks, like the bridge during “Metal Meltdown”, to recover before the next run.
An album so powerful was exactly what the band needed.

In 1990 the band was coming from two poorly-received albums, “Turbo” (1986) and “Ram It Down” (1988), both criticized for the heavy use of synths and substandard songwriting, and during the summer the infamous subliminal messages trial had taken place. There was the need for some change.
This album showed the world a new, invigorated version of Judas Priest: longtime drummer Dave Holland was replaced with double-kick aficionado Scott Travis, and for the first time since 1976’s “Sad Wings Of Destiny”, instead of Tom Allom, new producer Chris Tsangarides was hired; thus the band had a new, heavier sound fit for a comeback.

And really, what a comeback it was! Priest is a band that always kept its style while exploring different sounds throughout its career, but when compared to everything else this band had done this release is in a league of its own; with speed and thrash-inspired elements appearing here and there, accompanied by a slightly revised, tougher look, “Painkiller” is classic heavy metal driven to the extreme.

Judas Priest had already made history. “British Steel” had already become a classic – that is, a unique achievement which dictates how everything that follows should be. In this sense, “Painkiller” could be considered the last classic album of the 80s and the first classic of the 90s, because while it was still heavily influenced by the previous decade’s style, it also displayed elements of innovation, laying ground for a new generation of heavy metal bands.
A prime example of this is the German band Primal Fear: founded in 1997 by Ralf Scheepers and Mat Sinner, after the former wasn’t hired… as Rob Halford’s replacement in Judas Priest, the band played – and still plays – a blend of heavy and speed metal rather familiar to us (listen to “Chainbreaker”); a Classicist band then, based on the artistic imitation/inspiration of the classics.
With “Painkiller”, the band made history again and produced its last classic album. The latest albums are good and enjoyable, sure, but personally I don’t think they ever had a comparable artistic relevance.

This album sealed Judas Priest’s status as a legendary band, showing their capability in standing the test of time and their legacy as both innovators and “keepers” of the genre. A sort of do-not-forget-about-us kind of album.

It’s pretty ironic that after this hell of an album, singer Rob Halford would leave the band only to return in 2004. In the meantime he recorded a couple of solo albums with various projects, and Judas Priest published two rather forgettable albums with Tim “Ripper” Owens… the 90s were a hard time for everyone.