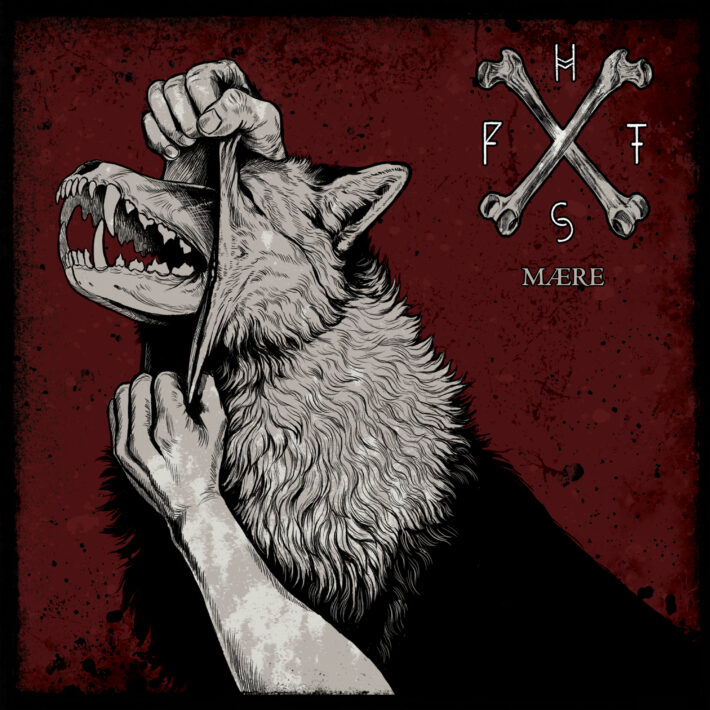 In the nearly ten years that Harakiri for the Sky have been around, they’ve made quite a name for themselves. The post black metal duo from Austria creates an intriguing mix between (atmospheric) black metal and post rock, alternating intense passages with more quiet, melodic ones. This Friday, they release their fifth studio album, called Mӕre. Mӕre is a malicious folkloristic entity that creeps on sleeping people’s chests at night, causing breathlessness and anxiety, making it perfectly fit for the band’s lyrical themes. As far as the album’s vibe goes, however, it’s not just despair and depression, but there’s also a touch of hope. This equilibrium between makes for an impressive listening experience.

Apart from the haunting atmosphere, one of the first things that stood out upon listening to the record was the overall catchiness of the riffs and melodies. Throughout each song, melodies keep coming back in different forms and instrumentations, making the songs easily recognizable for the listener. The mix is also done well, so that each instrument can be heard individually. Furthermore, there’s lots of fills and variations in the drums, but the main beat is still easy to follow, making the music fit to bang your head to. Another notable aspect of the album is each song’s length. With one exception that’s shorter, each track is between seven and eleven minutes long. At first, this might seem a bit long, but there’s enough variation to keep the tracks interesting, and the music easily takes you along in its aural scenery, making the time fly without you even noticing.

The album starts off with I, Pallbearer, which incidentally is also the first single the band released. This was a good choice, because it isn’t just an intriguing song that makes the listener hyped for the full record, but it’s also really representative for the rest of the music: many of the elements on the album also appear on the first track. It starts with an intro on guitar, after which other guitar melodies harmonize with the first one. The drums join in, building up the tension, and after little over a minute, the band plays at full potential. The main riffs from the intro continue throughout the song, and a lot of countermelodies and harmonies are played, recontextualizing the main riffs over and over again. The drums are packed with fills, and the main beat changes multiple times, each time indicating the start of a new section. The vocals are intense, expressing the despair Mӕre might inflict upon its prey. Another intriguing aspect of the music is the piano. It serves as a soft counterpart to the harsh guitar sounds, and at the end of the song, its main themes are played on the piano to create a mellow outro.

HFTS seem to have used their connections in the genre, having arranged some interesting collaborations on Mӕre. Sing for the Damage We’ve Done, for example, features Alcest’s Neige. After about five minutes of intense and impressive post black metal, the energy suddenly dials down. Each instrument is played more calmly and Neige’s beautiful clean vocals create a hauntingly beautiful atmosphere. Later on the record, on Silver Needle // Golden Dawn, Gaerea’s anonymous vocalist contributes to the vocal section with his agonizing grunts. Though HFTS’s vocalist J.J. already has intense vocals, these two guest artists create some extra diversity on the album.

Overall, Mӕre is an impressive record. The music sucks you in and entrances you for the full, nearly one and a half hours of playtime. It’s filled with diversity: melodies, countermelodies and harmonies on the melodic instruments, various rhythms and many fills on the drums, and even three vocalists make sure new things can be heard throughout the whole record. This variation, as well as the catchiness of the melodies, make it an accessible album, even for those who are not too acquainted with the genre. Harakiri for the Sky prove that after ten years, they still deserve to be among the leading bands in the genre, so I’d definitely recommend checking out their new release.

Click here to visit Harakiri for the Sky’s Bandcamp

Botanist - Ecosystem Review
Khandra - All Occupied By Sole Death Review
Behemoth - I Loved You At Your Darkest Review
Hellfrost And Fire - Fire, Frost And Hell Review