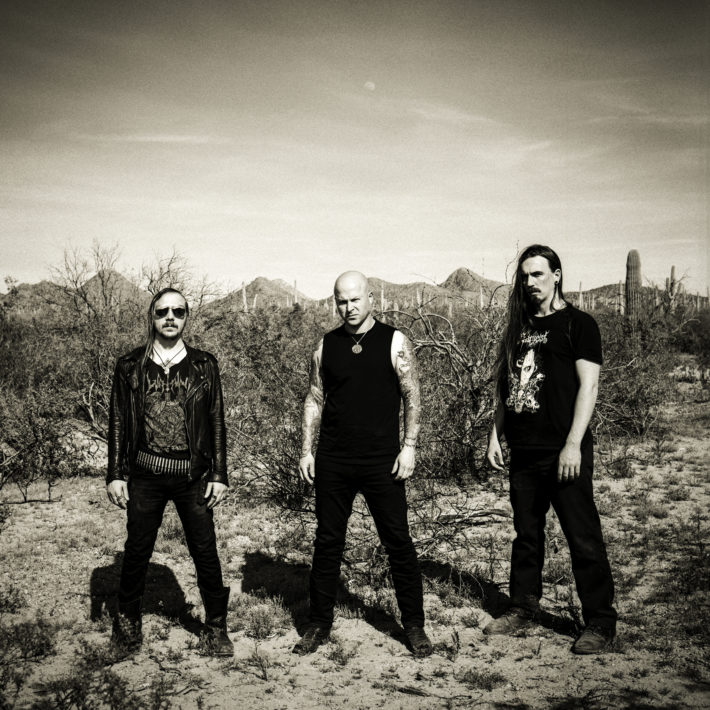 Hailing from Arizona, Devil With No Name is a western black metal trio founded by members of Lord Mantis, Void Omnia, Sovereign and others, whose eponymous debut was released on May 22nd. I conducted a Q&A with the band, so here it is.

Good morning, this is Rick! Who am I speaking with, and what’s your role in the band?

This is Andrew. You know, the guy with the shaved head. I handle guitar duties and most of the vocals as of now.

How and when was this project conceived?

A few years ago actually. It’s taken some time for us to get this LP out finally. Crazy stories to go with that. Suffice to say, getting shit done in Arizona with anything music-wise can be many hurdles. I’ve started to get a handle on things here and shaped reality into something that works for me. Devil With No Name was born out of fire and will.

During an interview with Decibel, you said that “the desert has a charm and majesty all its own”, and that it can resemble typical-black-metal-background Scandinavia. Do you plan on incorporating and further exploring this side of the desert in your future releases?

Oh definitely. I have some sick ideas as to what I will be incorporating on a full-length. I don’t want to share them though cause I don’t need other people stealing them. They can steal my ideas after I’m done.
What the desert has in common with Scandinavia is the harshness that comes with living in such and such an environment. Beyond that it’s the exact opposite. The sun beats down at the top of the sky in the desert while it sails seemingly forever on the edge closer to the poles.

I have seen an increasing number of bands and projects making their debut with an EP rather than a full-length, and I am always curious to understand the reasons behind this choice; what made you prefer this format?

I’d say half of the bands I’ve listened to usually had a demo or EP to start with. Nothing unusual about it. It’s just setting a foundation and getting your foot in the door as fast as possible. Our foot is a cowboy boot and looks cooler than the other combat boots and sneakers in the door, so check out our music.

Your name is a nod to the antihero from Sergio Leone’s movies; these movies have always had a big impact on music, and on countless artists’ works. What did you find in them that inspired you in making music?

I know they’ve had a big impact on me, but I wasn’t aware of their big impact on music necessarily beyond “The Ecstasy of Gold” by Ennio Morricone that Metallica used to play before their shows. The pop culture and styling of film has been ode’ed to a plenty such as by Tarantino.
The antihero, sure. Rebellious music can easily salute him.

I myself am a big fan of Leone’s works so I’m incredibly curious – what is your favorite movie from the Dollar Trilogy? Mine is “The Good, The Bad and The Ugly”.

For A Few Dollars More. I love how the final gun duel plays out at the end and the retribution achieved. They’re all hella amazing though.

Thanks to the guys from Devil With No Name for their time. Follow the trio on Facebook and Instagram, and check out their music on Bandcamp!