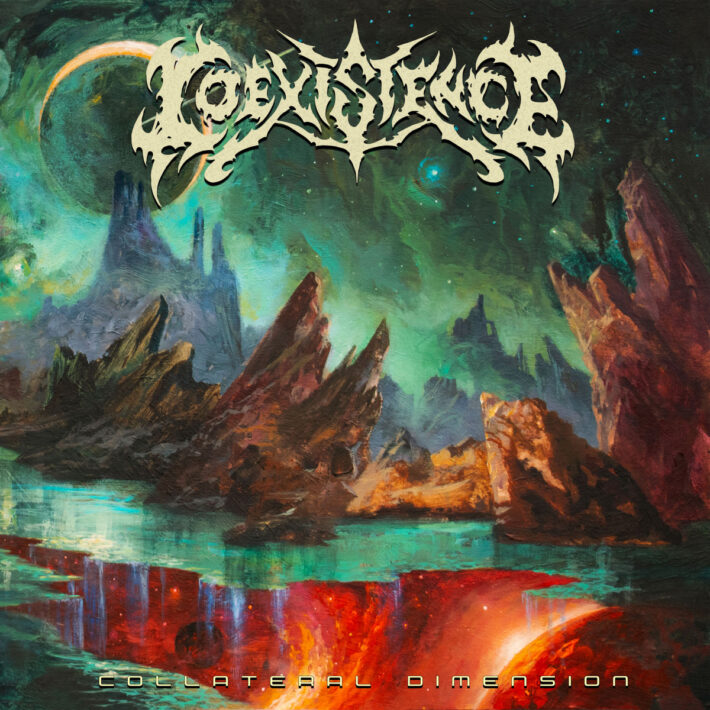 Debuts are difficult to judge. Usually, they sound rawer than subsequent releases, which is both a blessing and a curse. They can also stand on uneven footing as the band grapples with exactly what sort of music they want to play. Coexistence does not suffer this fate. On their debut album, they boldly thrust their sound forward towards that of a band long in the tooth. However, sounding established and being established are very different things. Regardless of how seasoned this band can sound at times, there are always growing pains to overcome in a band’s life.

Coexistence are a technical/progressive death metal band from Italy. They’ve released an EP, but Collateral Dimension brings their presence to the full-length world for the first time. This band sounds, at times, like a Beyond Creation cover band. Complicated, over-stuffed passages fly all around Collateral Dimension, with no unintended sacrifices to the heaviness and brutality that death metal desires.

Collateral Dimension delivers on the “technical” genre tag. Ever shifting-rhythms and time signatures keep the music continually fresh as Coexistence attempts to bury the listener under a cacophony of different phrases. Occasionally they’ll pull out of their more typical syncopated sound to play a more straightforward bridge or chorus, but those moments only serve to heighten the tension until the more frantic sounds return. It takes a lot of skill to write technical death metal, and Coexistence delivers. Nothing in the songwriting blows me away as a masterpiece, but it feels fun and keeps the ball rolling forward.

It’s one thing to write an ambitious piece, it’s another to execute it. Coexistence nails this as well. Every single performance impresses. The vocals vary from guttural to approaching black metal territory, all while maintaining their power. The drums frantically pound away, providing a near constant bombardment of terror until the exact moment the music calls for a more mellow passage, at which point they provide the perfect exoskeleton for that style of music as well. The fretless bass jumps all over the place and provides the depth that this genre desperately needs at times. The guitars form the centerpoint of the album, as the dueling axes switch from clashing to consonant lines whenever Coexistence desires. This is music to impress, and impress the band does.

Unfortunately, they don’t do much more than that. Most of the riffs feel bland despite their dazzling surroundings, and most tracks tend to run out of steam because of this. Truly great entries in the genre are able to use their technicality to impress while maintaining what makes death metal compelling in the first place. At its worst, Collateral Dimension feels like excellent, gourmet frosting that the cake decorator made look as stunning as possible, but without the cake underneath.

When I finish listening to Collateral Dimension, I can’t remember much about it at all. There is one guitar phrase that repeats throughout multiple songs, which would be a blessing were it interesting. Instead, it feels like filler material and makes the songs blend together despite their differences and technicality. If your biggest selling point is your dazzling virtuosity, having a significant portion of your album consist of bland sounds that the audience is just waiting to get through can sink your release. Earlier, I said that nothing in the songwriting blows me away. Because of the lack of good riffs and memorable moments, it needed to. Without technical prowess there is nothing to make this release captivating. It doesn’t help that Coexistence stretches out their album too long. By the time most songs ended, I had desired their demise for multiple minutes.

All that glitters is not gold. However, Coexistence provides a decent crunch on their debut, and they manage to do so with competence. They will need to take a step forward in the songwriting department for their next release if they want to stand beside the big names of their genre, but for now, they’ve created a good foundation for their career. If you’re looking for progressive or technical death metal, Coexistence will be alluring to you.