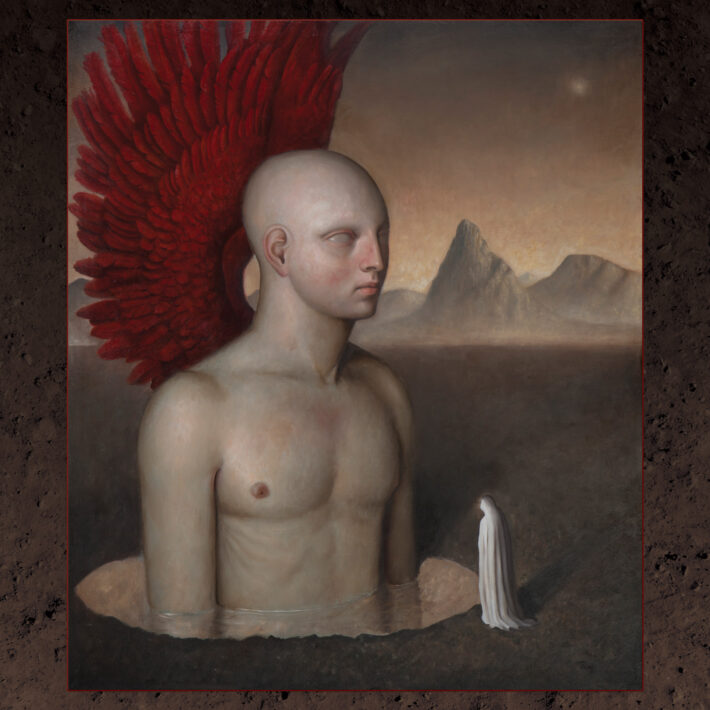 Ετερόφωτος. “The one whose light comes from others.” You probably know about Spectral Lore, but if you don’t, this one-man atmospheric black metal group from Greece has a long list of releases that carve out their own slight corner of the genre using a distinctive tone and some heavy subject matter. Spectral Lore released a split with Mare Cognitum last year, and given that both artists have returned with their own solo full lengths in just a year, comparisons and worries inevitably abound. The new Mare Cognitum record was a triumph, and Spectral Lore certainly has the talent and the passion to meet or exceed their peers. Given all this, I can’t help but wonder how less frustrated I would be with Ετερόφωτος if a different artist released it.

For an atmospheric album, Spectral Lore kicks this release off with a tumultuous spark. The opening guitar notes immediately slither up and down the fret with unexpected intensity. As the track unfolds it continues to build, slowly but surely, until the familiar and well-worn tones of Spectral Lore collapse inward and the music concludes. The only problem is that this happens five minutes in and the song lasts for thirteen minutes. At this point in my early listens of Ετερόφωτος, I would look at the track listing and begin to feel some dread. I’ve since learned to stop doubting this album. Ετερόφωτος is filled with long experiences, but the good ones burst at the seams with ideas. After the opener finishes its false ending, I feel excited to hear the rest of the track, rather than bored at the long lengths of potentially pointless exercises. Throughout the release the music doesn’t feel as monotonous one fears from an atmospheric black metal album.

Still, Ετερόφωτος remains a long release. Spectral Lore fills the time better than most, but the first six tracks sound close enough to the classic Spectral Lore sound that listeners who don’t love this guy’s sound will find themselves abandoning the experience well before the album abandons them. The final track is a problem that I’m putting off addressing because I want to talk about what I enjoy rather than how Spectral Lore shoots himself in the foot at times, but even before that this record takes up significant space in every way. I enjoyed it, so this felt like more of a good thing to me. However much I felt elated at songs that felt like they should have become boring after four minutes in but retained my attention for the full ten-plus minutes, these songs still didn’t need to be as long as they are. They feel less like long tracks that progress cohesively and more like separate ideas stitched together.

Ετερόφωτος felt wondrous at first. Over time and over listens, it fell to impressive. Spectral Lore has a few tricks that he uses repeatedly. Although this aids him in maintaining his musical identity in a saturated genre, it also means that his songs feel familiar. To be clear, I like these tricks. I hope he keeps using them on future albums and will continue to listen to most of his growing discography. “Impressive” is still impressive. It just feels like a groundbreaking, genre-defining release remains just slightly out of grasp. Maybe that’s not fair. What could exist needn’t lessen what does exist. At the same time, I can feel the album that could have been grasping at reality, occasionally barely breaking through the veil. Oh well. Ετερόφωτος still provides a full, captivating experience. Mostly.

OK, I can’t avoid talking about the final track anymore. “Terean” does not fit this record at all. Not just that, it’s nineteen minutes long. The promotional material gestures at a concept behind Ετερόφωτος, and maybe the track fills an important conceptual role, but the album abruptly shifts from black metal to ambient sounds and then just ends. My first time through I kept waiting for the song intro to end for the entire nineteen minutes. As far as ambient music goes, it’s fine, but somewhat on the sparse size, but this song really should have been a separate EP. As it is, this track contradicts everything that worked in the earlier songs. The result jarred me and took me out of the album. Instead of appreciating Spectral Lore’s versatility, I felt confused and ultimately bored because when “Terean” started I had just listened to almost an hour of music emotionally priming me for the exact opposite. Instead of feeling like an intriguing subversion of expectations, it instead feels like I blacked out, missed the end of the album, and woke up to an entirely different album without ever completing the experience of listening to this one. This song is a significant part of the record, and the only saving grace is that I can either end the record early or start it there if that’s what I’m in the mood for.

Don’t let the negativity of this review fool you, Spectral Lore is a black metal institution and Ετερόφωτος is a worthwhile release. Ετερόφωτος’s deficiencies just got under my skin. Spectral Lore remains an absolute musical force, and this release will be an album that I will continue listening to (most of) for a while. Unfortunately, The specter of what this album could have been clouds Ετερόφωτος.