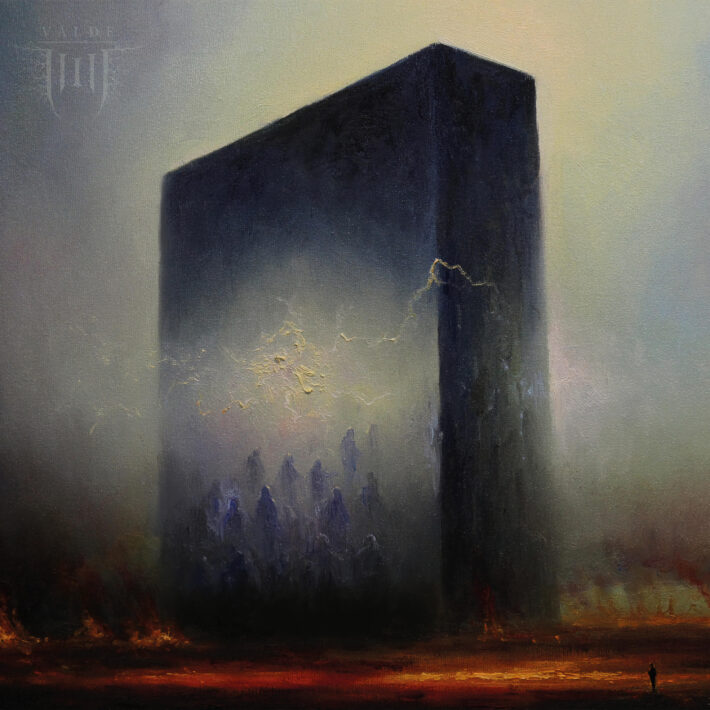 Some music fails to resonate with me, and some music is just poorly made. Yes, all music is subjective and all that. What I mean by “poorly made” is music that fails to achieve the artist’s objectives, for whatever reason-poor performance or production (think St. Anger), songwriting that doesn’t fit the musicians (think Illud Divinum Insanus), or everyone in the band temporarily losing their minds (think Cold Lake). Sometimes the problem isn’t the music, though. Sometimes the music feels perfectly fine, but I shy away from it for reasons less related to quality and more related to the places the songs take me or fail to take me. This isn’t entirely the band’s fault, but I can’t treat that response like it doesn’t exist either. Enter Välde.

Välde is the fourth album from Swedish group Humanity’s Last Breath. The promotional material claims that Humanity’s Last Breath is “Huge,”  “Monolithic,” “Terrifyingly Heavy,” and sounds “like someone getting an ice enema up the arse,” not necessarily in that order. Their description is largely accurate. The band shuns melody on their new release, instead attempting to rhythmically induce a trance in a manner similar to Meshuggah. Whereas Meshuggah still feels very firmly like a death metal band, Humanity’s Last Breath sounds more like an odd mixture of their influences: blackened djentcore.

On Välde, Humanity’s Last Breath provides a frigid atmosphere. The cold twisting of suffocation permeates this release to a degree that hints of the classic Blut Aus Nord release The Work Which Transforms God. Välde isn’t as dissonant as Blut Aus Nord’s masterpiece, but the two albums appear to have similar goals. Whereas Blut Aus Nord used dissonance and maintained a relatively consistent atmosphere to convey the weight of their release, Humanity’s Last Breath are much more reliant on rhythm. As mentioned, Meshuggah are the obvious comparison. The notes themselves seem like afterthoughts, with the real effort being poured into where they go.

Humanity’s Last Breath went all-in on this release. It feels more like one giant punch than a bunch of individual jabs. I don’t think this is a concept album, but it should still definitely be experienced as a whole, as the songs work better when contrasted with each other rather than on their own. This doesn’t mean that the tracks are bad: on the contrary,  there is some excellent writing here. This group has created a somewhat lengthy record of similar sounding tracks that never gets lost in itself and never grows stale. That’s quite an accomplishment.

If you read that last paragraph and then peeked down at the score I gave Välde, you may be confused. I shall explain. This record simply didn’t impact me the way the artists intended. I can recognize that the rhythmic focus of the album works well enough, but that doesn’t mean I resonated with it at all. At first, the album sounded like a frozen sculpture of obscured intrigue. As I kept listening it melted into a puddle.

The tropes used brought too much heat on Välde for it to maintain its form. To go back to my earlier comparisons, Blut Aus Nord made a record that sounds thoroughly alien and unlike most of the music that’s out there. Humanity’s Last Breath made a Meshuggah album with blackened and deathcore elements. They’re good elements, but for me this release tried to straddle the gap between being inhospitably nasty and drawing from its influences. Instead it fell into the cold abyss below.  Rather than make me appreciate the iterative nature of music, Välde made me want to go listen to its influences instead.

I recommend Välde to fans of Meshuggah, more technically-minded deathcore fans, and people who are looking for music that’s on the nastier side but that maintains its soul. Just because it didn’t work for me doesn’t mean it won’t work for you.