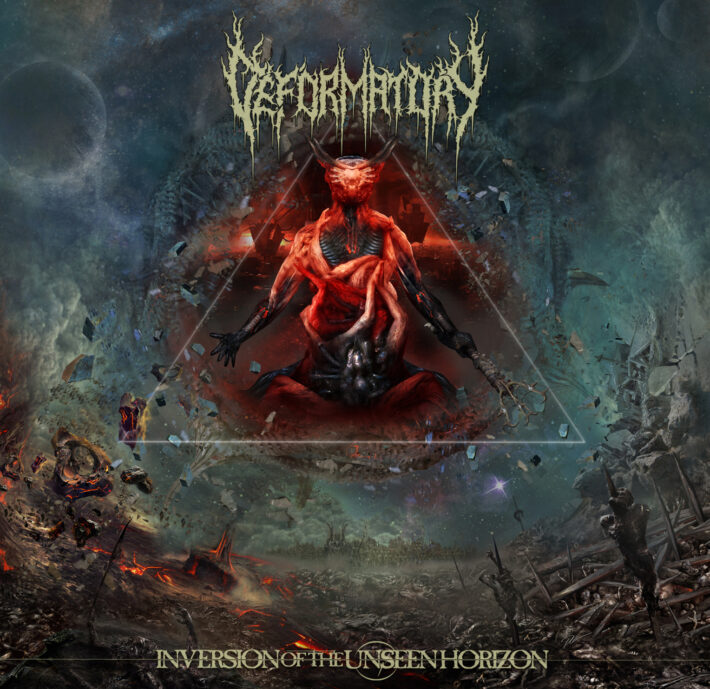 Deformatory are a brutal technical death metal group from Ottawa. Inversion Of The Unseen Horizon follows the band’s two previous full length releases and debut EP, all of which have been released since 2011. This group tosses subtlety to the side, and creates a musically uncompromising mess of sounds. Deformatory went with whatever would create a heavier feeling at every musical crossroads. Although the presence of this record is unquestionable, such relentless, singular pursuit can damn a record as easily as impress the listener.

Inversion Of The Unseen Horizon goes as far as you can expect from brutal tech death. Deformatory pummel, batter, and squeeze every sound they can from their relatively sparse instrumentation. If they can justify putting in a guitar squeal, they do. If a drum fill sounds possible, it goes in. Every riff gives the illusion of taking up more space than it actually does. The constant, uncompromising waterfalls of sound give Inversion Of The Unseen Horizon the extra edge that it needs.

This doesn’t mean that the record contains nothing but noise. Those riffs sound quite nice. With how meaty these songs are, maintaining musicality is no small feat. Deformatory have no problem bragging through their music. Without sacrificing brutality, they dazzle and dance. Without sacrificing virtuosity, they bludgeon the listener to death. They really can have their cake and eat it too. Although this type of success occurs more commonly than it used to, it still warms my heart to find a technical death metal group that straddles those lines successfully.

Inversion Of The Unseen Horizon isn’t rhythmically complex, but the production carries enough water for the record to hypnotize rather than stiffen up and split down the middle. Death metal can implode in a variety of ways. Deformatory laugh in the face of the idea of implosion. Rather than presenting a bricked, elementary mess for the sake of adhering to tropes, Deformatory make those tropes work for them. This album has a strange life to it, a rare warmth that allows me to leave the listening experience with a smile.

Still, the lack of variety ends up harming Inversion Of The Unseen Horizon. The release contains no surprises or bends. As much as I like this style of death metal, some unique hooks would have gone a long way. Yes, Deformatory crammed as much as they could into this release. But after enough listens this only amounts to an amorphous blob of music that sounds big with no other real defining features. For a record with this much impressive playing, how little I actually remember about the music other than a general heavy aura borders on astounding.

Inversion Of The Unseen Horizon never gets boring. Nearly forty-five minutes of non-stop avalanches sounds like a lot, but I never tired of the record, and never wanted to turn it off early. I wish there was more to it, I wish this band took their obvious talents and made the better record that’s within their grasp, but once I get over those feelings of disappointment, Deformatory left me with an enjoyable, unpretentious, and engaging release. This album could have easily been the opposite of all of those.

Rather than fall prey to the typical death metal pitfalls, Deformatory have pushed through to make a good record purely out of their own unending effort. Maybe Inversion Of The Unseen Horizon would have been better if the band expanded their sound, but it wouldn’t have been the same. I respect this level of commitment to an ideal. If you’re not a fan of this genre, Deformatory won’t change your mind. If you are, check out Inversion Of The Unseen Horizon to fulfill your brutal death itch.