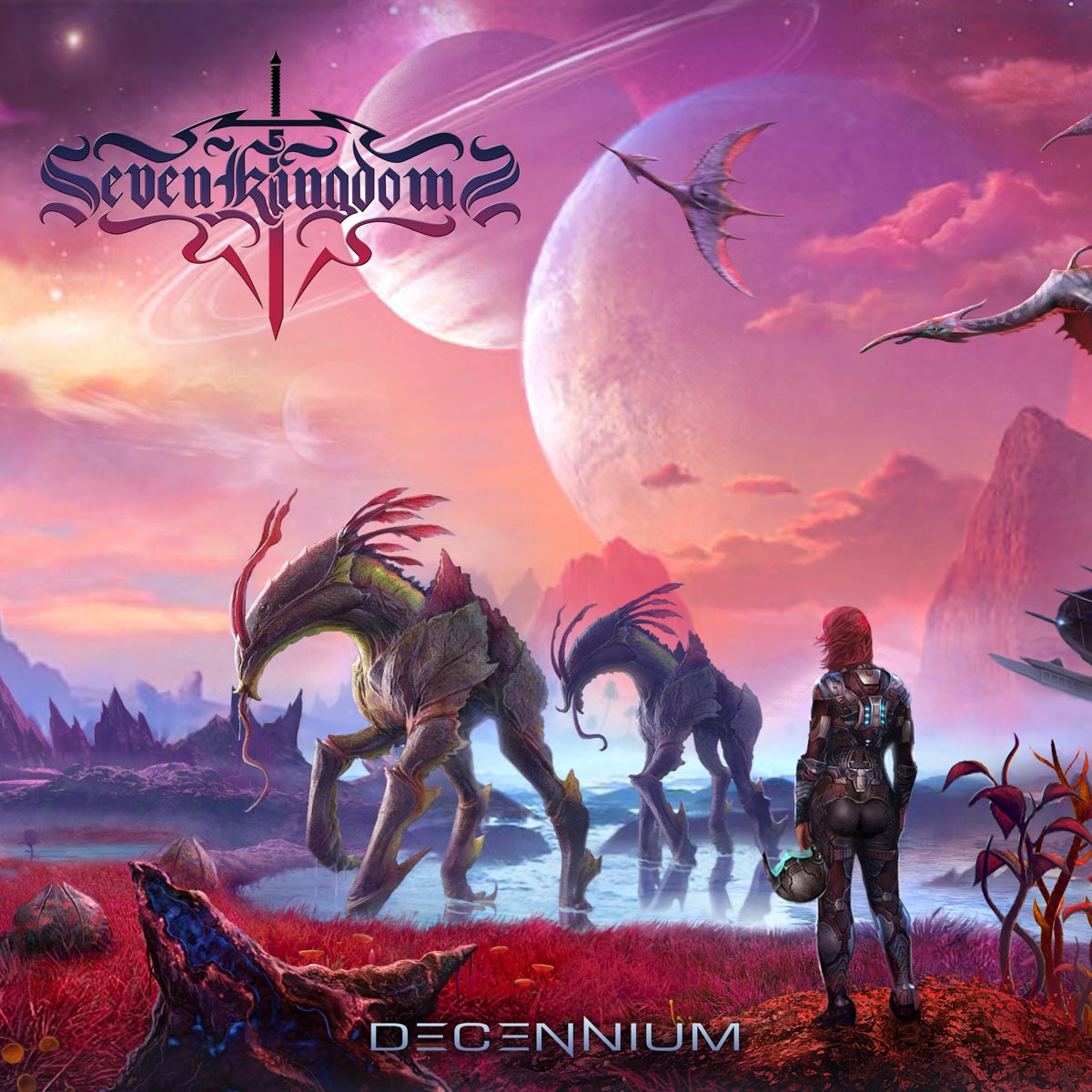 What wonders await us in the outward expanses of the Universe?  Have you ever taken a moment to look at the stars in the night sky, or browsed through pictures of nebulae and star clusters?  If you do, you’ll no doubt be struck by their beauty and majesty.  There’s a common misconception that metal is always dark and dreary, but bands like Seven Kingdoms fight against that trend.  Espousing principles of science fiction and fantasy, Seven Kingdom’s latest album cover for Decennium captures a stunning vista that looks as if it were taken from an Anne McCaffrey novel.  The vibrant colors emphasize a world that is unknown, exciting, and ready to be explored.

So let’s explore!  Visuals aside, Seven Kingdoms knows how to rock.  The band plays blistering power metal in the vein of Helloween and Blind Guardian, with just a touch of progressiveness.  Seven Kingdoms’ lineup has been in constant turmoil over the years, which has led to changes in the band’s sound.  The current iteration of the band is without a doubt its best, and it seems that if the band can keep a steady roster, there will be even greater things in the future.  Fans of female vocals in metal, especially those who enjoy Nightwish and Epica, will find a new favorite in Sabrina Valentine.  Her voice is naturally soprano, but she also hits some notes in the alto range.  Dual guitars also give the record a deep, full, and resonant atmosphere.  Unlike most European power metal, Seven Kingdoms also features the bass guitar more often in their music, which is a welcome addition to the menagerie of sound.

Decennium is out of the gate at full speed with the song “Stargazer.”   The guitars shred at a furious pace, and some gang vocals support Valentine’s soaring voice.  In a few sections, you can also hear the bass guitar thumping along.  The next two songs, “Undying” and “In the Walls,” were both featured on the band’s previous EP that was released in 2016.  “Undying” undoubtedly boasts one of the best choruses on Decennium.  This song also showcases the generous musical influences of Seven Kingdoms, including furious thrash grooves and galumphing Maiden-esque riffs.  “In the Walls” is a more straightforward power metal piece, and is also a bit darker in its lyrical scope.

“The Tale of Deathface Ginny” tells the story of a tragic romance that culminates in an intrepid guitar solo.  The distortion in the guitars at the beginning and end of this song creates an endearing vibe.  Valentine shines in “Castles in the Snow,” creating multiple variations in her vocal repertoire.  The guitar riffs in this song are the silver linings of comets, swooping in with interstellar dust and velocity.  “Kingslayer” comes across as a bit generic, although Valentine’s vocals help to save the song.  “The Faceless Hero” suffers from some of the same issues, and it’s at this point in the record that it could have greatly benefited from a change of pace.  An instrumental or ballad would have fit very well here.

In the last third of Decennium, Seven Kingdoms straps an extra fuel pod to their rocket ship and blasts out of the atmosphere.  “Neverending” features some brilliant progressive guitar lines, and its driving melody propels the song forward.  Valentine also puts a bit of grit into her voice at times.  Bassist Aaron Sluss provides unrefined energy to “Neverending.”  The introduction to “Hollow” takes advantage of both guitars, creating a breakneck pacing to the song.  Valentine adjusts her dynamic range multiple times on this song, making it one of the most endearing on the record.  In addition, supporting group vocals add an epic feel to the track.  “Awakened from Nothing” is perhaps the heaviest song on Decennium.  It begins with a breakdown and then segues into some atmospheric riffing that is framed by Valenine’s sonorous vocals.  The rhythm guitar does an excellent job of supporting the other instruments, and the pounding drums also shine on the album closer.  The final lead guitar solo juxtaposed vis-à-vis the rhythmic guitar is nothing short of brilliant.

The band based its name on George R. R. Martin’s “A Song of Fire and Ice” series, and they’ve done a good job of capturing that epic feel on Decennium. Without a doubt, it’s one of the best power metal albums to be released in the last few years.  The only thing missing on Decennium is a minor abeyance in pace to balance things out. Seven Kingdoms has opened before at concerts for such greats as Blind Guardian and Sonata Arctica, but if they keep this up, I wouldn’t be surprised if they start headlining some big tours.  So grab your favorite beverage, strap yourself into the nearest rocket ship, and prepare for some invigorating power metal that’s out of this world.

Tracklist:
1. Stargazer
2. Undying
3. In the Walls
4. The Tale of Deathface Ginny
5. Castles in the Snow
6. Kingslayer
7. The Faceless Hero
8. Neverending
9. Hollow
10. Awakened From Nothing