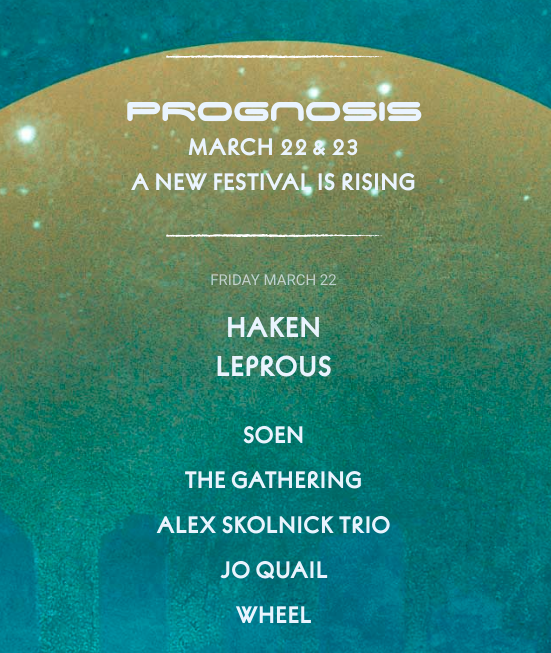 Prognosis Festival – “A New Festival Is Rising.” That’s the slogan of the prog-festival held the 22nd and 23rd of March 2019 in the Dutch city Eindhoven. It wasn’t just a music festival, but there were also clinics from the leading artists in the prog-genre, like Charlie Griffiths and Richard Hensall from Haken, the composer and cellist Jo Quail and the well-known Devin Townsend. Its exceptional line-up and conference with clinics attracted people from all over the world: there were people from Germany, France and Scandinavia, but also from the US, Mexico and Argentina! Thanks to Earsplit PR, Silver Lining Music and the fact that I can write for Metal Utopia, I was lucky enough to get a press pass for the first day of the festival, allowing me to see the seven fantastic bands that played on Friday: Wheel, Jo Quail, Alex Skolnick Trio, The Gathering, Soen, Leprous and Haken!

The band that kicked off the festival was Wheel, a progressive rock/metal band from Finland/England. Even though they were the first band, the concert hall was already pretty crowded. They entered the stage wearing black hoods, and they were welcomed with loud applause, already indicating the presence of some pretty dedicated fans. From the first note, the music was very tightly played, the singer had an impressive vocal range and didn’t seem to miss any note. It was quite obvious who were the dedicated fans, but the rest of the crowd also got pretty caught up in the music. While the band played, you could see the majority of the audience nodding to the beat of the music, and after the first song, there was a burst of applause. The band wasn’t too dynamic, each band member kind of stayed in their place, but the music was played so well that it definitely made up for it.

Next up was The Gathering, a Dutch prog rock/post-rock/metal/shoegaze band that celebrates their 30th anniversary this year. To celebrate, they played a special set with a selection of songs spanning from the beginning of their career to the present. The whole band, except the singer, entered the stage and started playing. They put a lot of feeling in the music, not really dealing with the audience at the beginning, but paying all their attention to their instruments. After the first song the band’s female vocalist, Silje Wergeland joined the band on stage, putting the cherry on top of what was already an awesome performance. She was really expressive in both her singing as well as her gestures. With the arrival of Silje, the whole band got more lively, and so did the crowd, pulsating to the beat. It was a really good performance.

About half an hour before the end of The Gathering’s show, Jo Quail started playing in the small hall. Even though it was a shame walking away from The Gathering, I’m super glad I did, because what Jo Quail had to offer was something I’d never seen nor expected to see in my life. The only instrument she used was an electric cello with a loop pedal, with which she produced phenomenal music! She produced every sound on the spot, only with her cello by drumming on it, sliding her fingers over the strings, or sweeping, tapping and hitting the strings with her bow. The soundscapes she produced were hypnotic, as you could see very well in the audience. Everyone was just standing there, impressed by what she was playing until, after a good 10 minutes, she finished her first song, and the crowd exploded into a thunderous applause. She even premiered a new song, making for a very special set.

After Jo Quail’s concert it was time for the first headliner of the night: Leprous. Even though they played in the large hall, it was so crowded that getting from one end of the hall to the other side took me about 10 minutes. From the first second, they were jumping around in energy, making it even more impressive that they played so tightly while moving around so much. The lights fit the music perfectly, for every drum beat in their irregular time signatures was accompanied with a flash of light. The set was unique, they played The Congregation in full, playing songs that hadn’t been played live any time before. The vocals were great, every note in his extremely broad vocal range was spot-on. During the concert, almost every band member moved around all the time, making the performance just as dynamic and energetic as the album itself. You could see this was one of the headliners, for the crowd was just wild, from start to finish. It was a concert that I won’t forget anytime soon!

While Leprous were playing the roof off of the large hall, the small hall had a more relaxed band playing: Alex Skolnick Trio. It turns out the original guitarist from Testament has another side to him, where he plays improvised music together with a drummer and a bassist who actually plays on a classical double bass, giving the music a jazzy tone. Because they played at the same time as a headliner, there weren’t too many people, but I think this only improved the calm ambience the Trio created. They stood there, skillfully playing their instruments, relaxed as if they were at home, but at the same time connecting with the audience, making for a great performance.

After Alex Skolnick Trio and Leprous were done, it was Soen’s turn to play in the small concert hall. This created a bit of a logistic problem, because a large part of the large hall’s capacity had to fit into the small hall. After security made sure everyone who wanted to get out of the hall was actually out, they carefully let new people back in. The sound check lasted some ten minutes longer than planned, but when Soen finally entered the stage, the audience responded very enthousiastically. Even though they played in the small hall, it was as if all the energy from the crowd in the large hall was packed into this one. And Soen responded very well to that energy. As opposed to some bands I’ve seen at other festivals, Soen really looked like they were enjoying themselves. Meanwhile, their performance was solid, they were really in sync, music-wise. It was obvious that they knew their set well, because they played their music effortlessly. They also interacted a lot with the crowd, which made for a very fun experience!

Last but not least, the ones who got to finish the awesome evening were Haken. At the beginning, it wasn’t as crowded as Leprous’s concert, but this was probably because Soen was still playing at that time, because after those were done, the hall filled up with people. After playing Rossini’s famous Guillame Tell Ouverture and the intro to their newest album, Vector, they came running onto the stage, making the audience go crazy. Their performance was solid, everything fit and the vocals, who were right on key, made it perfect. They proved they’re not just good in the studio, but also live. The singer really acted with grand gestures and he kept running around the stage. At the beginning, the other band members seemed kind of like the static elements on the stage, but this changed when the synth player took his keytar and ran around the stage to play with every band member one by one. They interacted with the audience really well and the audience was really responsive too, doing things like shouting “Hey!” to the beat or singing along with the music. It was an explosive finale to the night.

Overall, the Prognosis Festival was an experience I wouldn’t have wanted to miss for the world! Each band played tremendously: whether it was the opening band for the night or the headliner, you could see the professionalism and skill of every single musician. Even though they were all prog (or a similar genre), it was a very diverse night, with every band having their own, unique sound. If the festival is being held again, or if any of the bands are in town, I’d recommend anyone to go there!