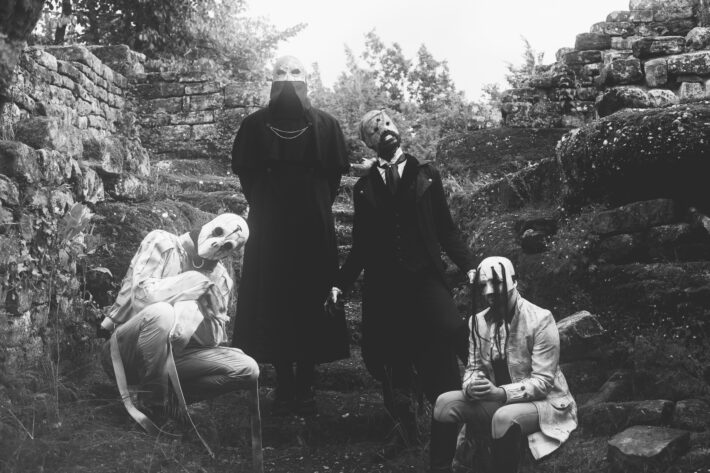 Exanimis is a young symphonic death metal band from France, whose exciting debut album “Marionnettiste” has just been published. Here’s a Q&A I did with the guys.

Hello, this is Rick! Who am I talking to, what’s your role in the band?

Julien P: Hello Rick! Thank you for your invitation, I’m Julien Prost I play bass in the band and I also do some orchestral arrangement.
Alexandre: Hi Rick! I’m Alexandre and I do guitars, vocals, I compose and write with Julien.

Exanimis was started in 2015, but your very first album was published this year; what has happened during all these years ?

Julien P: We’ve been through a lot, the composition process took around 3 years of hard work, especially with all the orchestral arrangements, but once everything was done and we were happy about it we moved to the studio, and in the middle of the recording session the former guitarist left the band, so my bandmate Alex had to took care of the missing guitar parts. We also had to call Morgan Koch from Swarmaggedon which is an amazing guitar player and a long-time friend to do some lead guitars on the album… it was kind of stressful in that time haha.
When everything was recorded, mixed and mastered we took a lot of time working on all the visuals with our illustrator Loïc Muzy, an incredible artist who instantly understood what we wanted in term of “lore”.

So yeah! It took some times, but to be honest, everything is done since 2019 but when we were finally ready to release the album the COVID pandemic broke out and paralyzed everything… so we waited.. and waited…and waited, but since it hasn’t stopped we couldn’t wait anymore and we decided to release it anyway.

Let’s talk a bit about the album itself. Why “Marionnettiste”, who is this puppeteer? What’s the story behind the album – and this protagonist?

Alexandre: It is not a “character” in the proper sense of the term. All of the songs are about someone, like a king, a scholar or a watchmaker, thinking of pulling the strings of his own life, but actually controlled by something beyond him, like lust for power, desire of war, the passage of time or an unfulfilled hunger for human flesh… All of these characters are controlled by these things which ends up turning into nightmares, that the listener is invited to follow through the different songs. Finally, we all are the puppeteer or the puppet of something or someone.

This album has many classical influences, and even a certain “cinematic” atmosphere. Where did these elements come from, what – or better, who – inspired you while composing these particular sections?

Julien P: Indeed! I would say we have more “cinematic” influences than classical, especially the cinema with for example Danny Elfman and Howard Shore which are part of my major inspirations, the video games like the Dark Souls series and Bloodborne but also bands we love like Fleshgod Apocalypse, Septicflesh or Carach Angren.
Alexandre: In addition to what my bandmate said, movies like “Bram Stocker’s Dracula”, “Hellraiser” or imaginary from H.P. Lovecraft  are huge source of inspirations for us.

You all are former students of Music Academy International; how did music school benefit you, aside from the playing skills standpoint? Did it help you in composing an album so full of orchestral arrangements such as this?

Julien P: Actually not really, I mean this school has a lot of different classes like “Production” who focus only on the studio/live side of the music, “Vocals” for the singers etc… we were in “Modern Music” classes and here they teach you harmony, rhythm, playing skills on the instrument and how to play your instruments in many many different style alone and in a band with other musician in the school, from boring smoothest jazz ever, funk, fusion, pop, rock to metal… which is awesome, to learn how to play so many different things, but in this classes we did not have orchestral arrangement lessons so we had to learn by ourselves. It was pretty tough though, because orchestral arrangement have pretty strict rules… you can’t do anything you want, we made a lot of mistake in the beginning.
Actually they have a “Movie Scoring” classes where you can learn orchestral arrangements, but we didn’t feel like doing an extra years for this… and it’s also fu*king expensive!

Lots of session musicians are featured on “Marionnettiste” – are you planning on adding new members for future albums, or do you think you’ll continue relying on session or live musicians?

Julien P: Yeah we have several session musicians, Clement Denys on drums from Fractal Universe, Morgan Koch from Swarmaggedon on lead guitars for the reasons I mentioned before, Nathalie Theveny on the piano, Raphael Jeandenand on Hammond organ and Flavien Morel from Benighted Soul, who also mixed and mastered the album, on clean vocals with Alex on “The Slow Flow of the Spume on The Shore”. We asked them because they know how to do some things that we don’t. The piano for exemple, nobody in the band know how to play piano and it’s better to have a real pianist than a shitty MIDI track with no human feeling.
Alexandre: The only current member we are looking for would be an official drummer, but because of the complexity of our drumparts, it is not an easy task to find the good guy.

Nowadays death metal in general is going strong. What got you into symphonic death metal specifically? How do you maintain your originality while playing a subgenre that is so heavily connotated with defying characteristics?

Alexandre: We didn’t even ask the question. This choice was the most natural for us, and I think this is because of the music styles and the culture in general that we grew up with. At least, this is not a very exploited subgenre for now. I would say that our trademark comes from the dreamlike/grandiloquant side of our music, which also feeds our imagery. And of course, we are heavily influenced by Prog Metal bands like Dream Theater or Opeth to name but two. This is not very common in the Death Metal world… I suppose haha.

“Marionnettiste” did very well, even more so since it’s a debut! What are now your plans? And, in the dream realm, what would be your ultimate goal as a band ?

Julien P: Thank you! We really appreciate, I think the plan for now is the same than everyone else, go on stage and touring, to be honest I don’t know if I have a really precise goal in my mind but I think we just want to do this as long as possible… and if one day we can share a tour with Fleshgod Apocalypse I will be the happiest guy on Earth!

Alexandre: And I don’t want to spoil anything, but we are already working on our second opus, which should be a lot more… crazy.