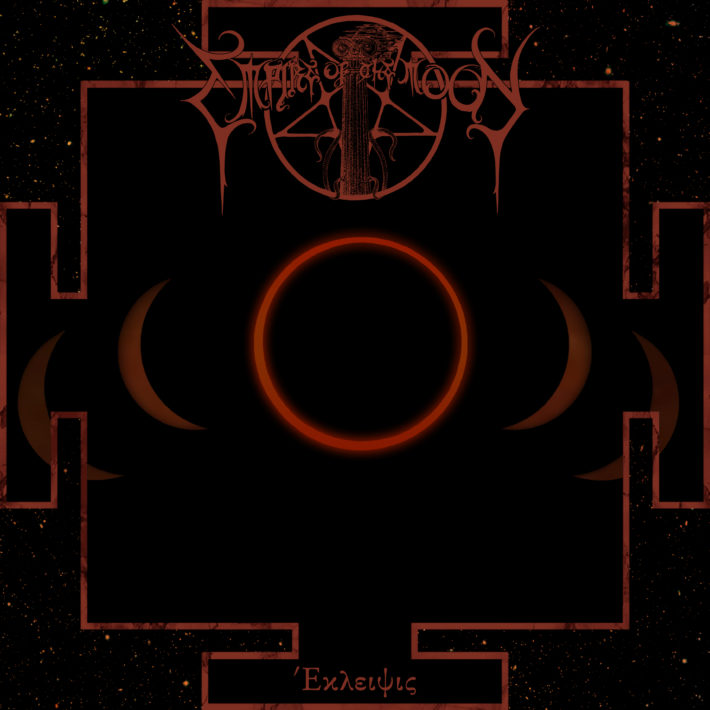 Empire of the Moon is a band with a unique history. After forming in 1996, the band released a demo called For the Ancient Light of Sinn in 1997. After a brief 17 year break, the band followed this up with their first full-length release in 2014. It has taken Empire of the Moon an additional six years to reach their second full length album, titled ΕΚΛΕΙΨΙΣ. I’ll be using the English translation of Eclipse in this review. The great expanse of time passing between albums could give Empire of the Moon the opportunity to perfect their sound and leave only the best aspects of their creative process in place. However, it could also make them stagnant, out of practice, and complacent. On Eclipse, Empire of the Moon manage to hit both of those extremes.

The music on Eclipse is somewhat typical Hellenic black metal. If you’ve ever heard any Rotting Christ, you will not be surprised by anything here. Rasping vocals supplemented with mystical chanting abound, with guitars playing high pitched tremolo in front of a drum machine and a sometimes perceptible bass guitar providing support. The music seems to promise a mystical celebration of paganism, although I stand no chance of actually understanding the lyrics, and Empire of the Moon seem to be playing this up to the nth degree, with the bulk of the album being part of a four track sequence called Per Aspera Ad Lunae, which I’m guessing translates to “through hardships to the moon.” They approach this pagan celebration through musical passages that you’ve heard hundreds of times before.

Empire of the Moon obviously took their time writing Eclipse, and it paid off. The tracks all sound intentional and deliberate, with the four parts of Per Aspera Ad Lunae actually sounding like four parts of a greater whole rather than just a weird name choice. Every song progresses smoothly and logically, and there doesn’t seem to be any wasted space or aimless wandering anywhere on Eclipse. That doesn’t mean that every note is perfect or necessary, but I can always tell what the band was going for even when I thought it didn’t work. Yes, there are some boring moments, but they always seem to be a disconnect with the listener or an issue with the performance rather than with the songs themselves.

Unfortunately, the consistent focus and great songwriting present on Eclipse don’t translate to a great album overall. Part of the fault here lies with the performances given by the band members themselves. The vocals sound raspy and weak, and this feels more like a limitation than a stylistic choice. Below that, the drums are extremely bland. I get that they’re using a drum machine, but it feels like they put the bare minimum into using it. Apparently six years isn’t enough to pay attention to that part of the album. The guitar playing is nice enough, but it’s not enough to carry the entire album. Ultimately, the performances seem bland and uninspired, and as a result it feels like the soul has been ripped out of an otherwise good release.

Ultimately it sounds like Eclipse needed to take 14 years as well. There are some very well-crafted, deliberate aspects of this release, but they are undermined by the seemingly-phoned-in performances. It’s bizarre to get this on an album that took this long to release. If you enjoy Hellenic black metal, you owe it to yourself to check out this interesting release from a band who has been in the shadows of the genre for most of its existence. If you’re not a fan, this will not do anything to win you over.

Click here to visit Empire of the Moon’s Bandcamp