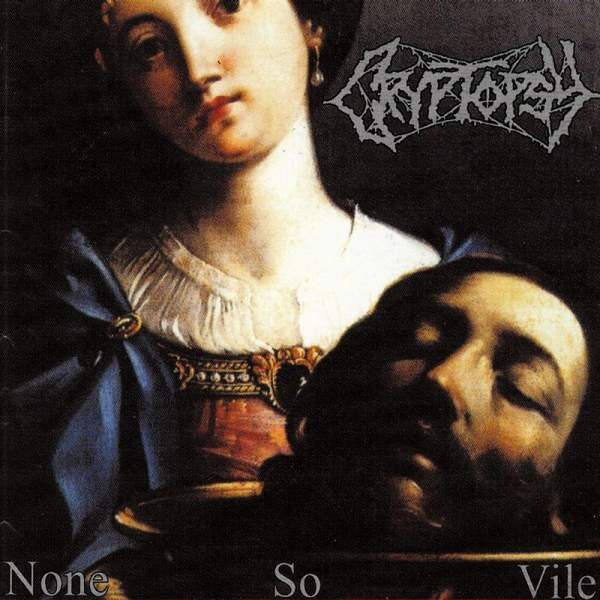 Cryptopsy’s first full-length album, Blasphemy Made Flesh, came out in 1994. Although a good release, it merely hinted at what would come two years later on the band’s sophomore release, None So Vile. The now-well-defined divide between dissonance and technicality hadn’t yet been realized, so Cryptopsy attempt to play everything at once. Because no one told them they couldn’t, they succeeded beyond most musicians’ wildest dreams.

What makes None So Vile special screams out immediately. There is no compromise anywhere on this record. Cryptopsy took every element of technical death metal and dragged them to their extremes. The riffs demand the listener’s attention in a way that later imitators often miss. Despite the crazed, sun-dried mania on display, the songs at the core of this album remain catchy and engaging. The tracks writhe forward with a pulsing inevitability. When you listen to None So Vile, you can’t mistake it for anything else.

Let’s talk about Flo Mounier’s drumming. The dude sounds like a heart attack. In a world of quantized drumming, Flo’s onslaught has an authentic feel that no amount of precision double-kicking can match. The beats feel haphazard, as if Flo is hearing the songs for the first time in the studio. It takes a lot for a drummer to steal the show, but Flo does it. These beats are anywhere and everywhere, and twenty-five years in they still drop jaws.

Lord Worm is the other unbelievable performance on None So Vile. His dog-bark howl sounds utterly unique, even in the world of death metal. After this record, he left the band to teach English, and the band never quite made it to this level again. But before all that, the opening barks of Crown of Horns signal the utter infallibility of these grunts. Don’t take this singling out of these two as a slight against the guitarist and bassist. Both are excellent, and the album wouldn’t be the same without them. It’s just that you hear guitars elsewhere. You hear bass, however good, elsewhere. You’ve never heard Lord Worm or Flo Mounier like this anywhere but here.

Before I give up on even pretending to explain None So Vile and start ranting about how good it is, one last thing: the shagginess of None So Vile gives it an authenticity that a lot of tech death lacks. In a genre with precision and overly-wrought extravagance, Cryptopsy find the perfect balance between being technically impressive and brutally emotional, and they sacrifice nothing of either for the other. This allows the band to squeeze ten pounds of manure into a five pound bag. Ok, onto the rant.

None So Vile only has one blemish: its length. I get that this type of music can get grating after a while, but I need more. Nothing else sounds quite like this. Blasphemy Made Flesh didn’t quite go to the same extremes, and Cryptopsy’s later releases range from not quite as good to The Unspoken King. None So Vile was lightning in a bottle, and I wish I could hear more of it. More of these ridiculous vocals, fuller-than-possible drum beats, and riffs that are catchy and muddy, precise and a mess at the same time. None So Vile probably isn’t my favorite tech death record, but I’d hesitate before naming any album better than it. The thirty-two minutes of punishment that Cryptopsy bring us feel like they’re over as soon as they begin. I never get tired of this, it never sounds anything less than fresh, and it’s always better than I remember. But None So Vile can’t ever be made again. The aggressive youthful ignorance of the genre is dead forever. Like all masterpieces, None So Vile has no right to work as well as it does, but for a brief moment everything clicked. Everyone played beyond their absolute potential. Every song and every note worked exactly as it was supposed to, precision and grime worked in harmony, ridiculous excesses propped each other up to new heights. And then it’s gone.

I assume you’ve heard None So Vile, but if you haven’t, this might be the record to either turn you onto tech death or throw you out of the genre forever. Death metal feels like it shattered into a million pieces, with each band contributing their own twist to the style. None So Vile is a relic from an earlier time, one that can’t be made anymore but strongly connects to every technical death metal release made today. Everything dies, but the past impacts us still.