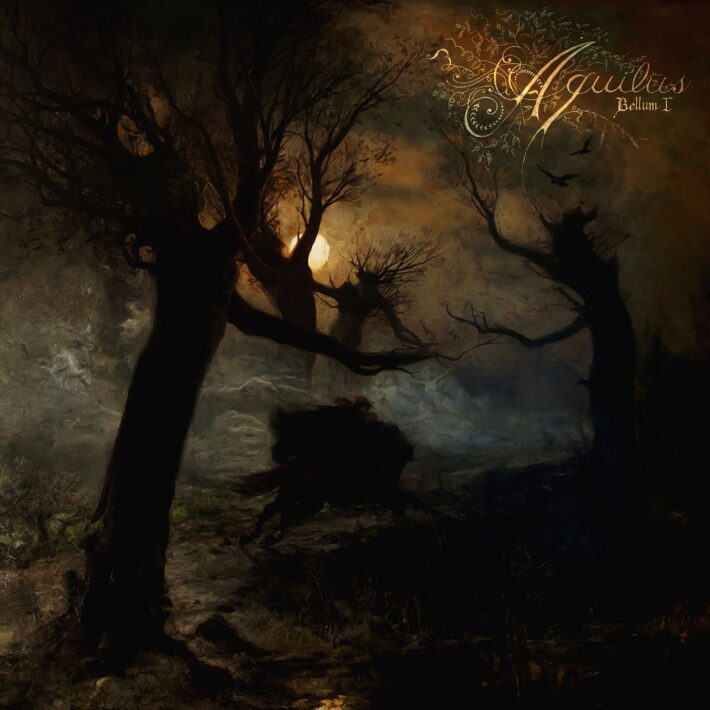 Aquilus is an atmospheric black metal project from Melbourne, Australia, whose debut album Griseus was one of the most ambitious masterpieces of the 2010s. If you’re unfamiliar, let me try to explain. Aquilus is a solo project by composer and multi-instrumentalist Horace “Waldorf” Rosenqvist, one of the most dapper lads in all of black metal.

His music can only be described as neoclassical-folk-black metal, with prior release Griseus incorporating heavy elements of ambient music and film score composition. It was, in my opinion, an unfathomably impressive masterwork whose only downsides were the excessive runtime and its penchant for prolonged ambient sections. Despite that, it’s a monumental record that I strongly recommend you listen through at least once. It’s unlike anything you’ve ever heard. But now, almost ten years after the release of Griseus, Waldorf is back, likely twirling his handlebar mustache and adjusting his bowtie. Can Bellum I live up to the expectations set by its grandiose big brother? Let’s get into it.

Following a majestic piano-led intro, the single “Into Wooded Hollows” begins on an appropriately sinister note. You get an immediate taste of Waldorf’s growls, leading into sections of black metal riffs with a menacing atmosphere. The synthesis of black metal guitar and piano passages on this track are especially addicting, providing a guiding melody like a light in the darkness depicted on the cover. We are presented with more orchestral elements as the track progresses, weaving between intense builds and atmospheric breaks. Tempo changes throughout the record keep you on your toes, and Rosenqvist’s masterful use of dynamics accentuates the impact of each passage. It’s difficult to put into words just how enveloping this entire record is, with layers upon layers of instrumentation and exceptional composition taking you on a treacherous journey down a dark, forested path.

“Eternal Unrest”, Bellum I’s longest track, takes us straight into juxtaposing dissonant guitar with harmonious strings, before giving way to melodious guitar leads. This track also features an acoustic section that leads into more pleasant atmospheric riffing, and back into dissonance. Aquilus creates deeply layered compositions that weave in and out of each other; between metal passages, classical passages, folk passages, and blends of the three.

Piano-driven number “Moon Isabelline” serves as an intermittent reprieve from the harsh atmosphere, as the whimsical piano solo embraces you with its airy, Chopin-like melodies played elegantly on a grand piano. The elegance is short-lived though, as “The Silent Passing” recaptures the menacing atmosphere, enveloping you with swirling guitar leads. Dissonant chords strike contrast with the strings before transitioning into a characteristically Opeth-ian riff that recalls Morningrise or My Arms, Your Hearse. In fact, many of the metal sections on Bellum I utilize Opeth’s signature 12/8 triplet-groove feel to great effect. Expansive sections in “Lucille’s Gate” make full use of strings combined with various riffing styles, and tempo changes between each section keep you engaged. A piano section at the back end leads us into “Empyreal Nightsky”, a ten-minute orchestral closer that would befit any dark fantasy film score. The Thomas Newman-esque composition on this track is unrivaled in its emotive atmospherics, although I felt the conclusion was relatively unremarkable.

Bellum I has a palpable foreboding feeling throughout all eight of its tracks. Considering that this album is a part one, we can expect that Bellum II should feel more climactic. It is entirely possible that the release of Bellum II could create an outstanding duology of albums. But does this record stand on its own? I think it does. Granted, it’s not as ambitious as his opus Griseus was, but I would argue that Bellum I is more listenable as a whole. Bellum I has a much more manageable runtime of 61 minutes (compared to Griseus’s monstrous 79 minutes), and Rosenqvist trims down much of his prolonged ambient sections, making Bellum I likely a more digestible record for the average atmo-black fan. The mystique that made Griseus so amazing is not lost here, but instead refined into a more focused package. The ten-year wait was a long one, but this record does not disappoint. Keep an eye out for Bellum II, I know I will.