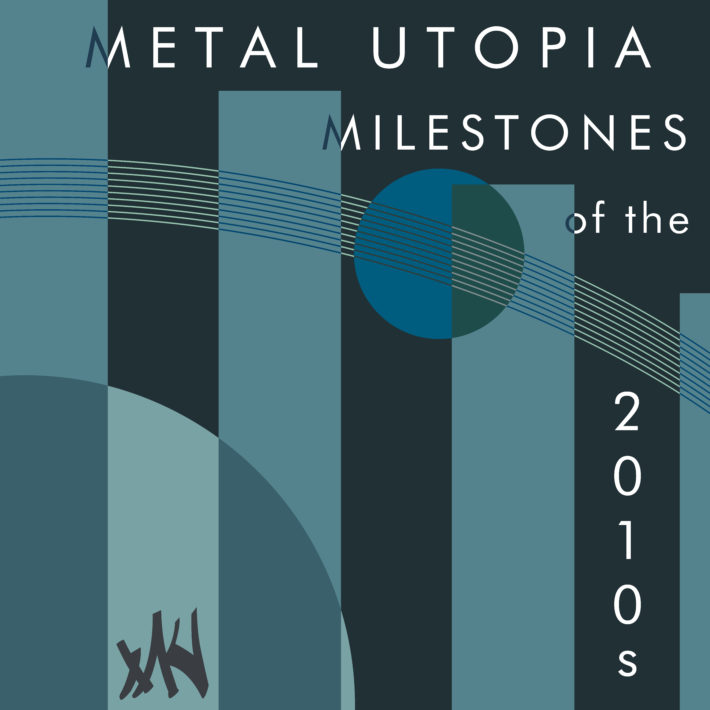 The decade comes to an end and we looked back at 10 years of great metal music. We decided to make a list of our top 10 milestone albums of the 2010s. We selected these records based on their popularity, influence and quality. If you disagree with our list, leave your own in the comments below.
Here’s the list:

The world of black metal and metal in general was forever changed with the birth of Alcest’s Écailles De Lune. This was one of the first records that seamlessly fused black metal with atmospheric post-metal and shoegaze to create something so grand and ethereal and unknowingly at the time, set the foundation for the countless bands to follow in the world of blackgaze. Although it can be argued that later records like Kodama or Spiritual Instinct are Alcest’s stronger records, Écailles De Lune is the record that set the stage for those specific records as well as many others with how innovative it truly was; nothing sounded quite like it at the time. Alcest were one of the first to take elements from several different genres which ultimately come together to create this incredibly dreamy and emotional musical amalgam. There were several other bands experimenting with that sound at around the same time (i.e Lantlos) but Alcest took it just one step further. With Écailles De Lune, Alcest became one of the pioneers of the blackgaze subgenre and are responsible taking black metal to the next level as well as making it much more accessible to listeners as well.

Yes, yes, I know, you hate djent. Or metalcore. Or emocore, or whatever you think makes you look like you have good taste now that nu metal is dead. While you’re over there being sophisticated and liking things that are ok to like, the rest of us are over here liking music that’s fun to listen to. Periphery’s self-titled debut has inspired many a knock-off band of varying quality, but there’s no denying the energy and passion that goes into their music.

Catchy, energetic, and irreverent, Periphery’s debut album helped shed the brutality of Meshuggah from the genre of djent and allowed it the versatility to breath and adapt over time. Gone are crushing rhythmic exercises and math rock, instead sing-alongable choruses and riffs dominate. While both sounds continue in the djent genre today (for better or worse), djent and metalcore would not be the same without Periphery. Keep hating the genres you’re supposed to hate, I’ll be somewhere else enjoying good music.

What makes The Contortionist’s “Exoplanet” a member of our albums of the decade? Around the same year of release as that album, The Acacia Strain released an album as well. It’s safe to say the Thy Art is Murder, The Acacia Strain, White Chapel, and Fit For and Autopsy could easily have been put in the same bucket. These are huge deathcore bands that cemented the American-based sound of deathcore. But then comes along Exoplanet, just as heavy and ruthless while maintaining the sci-fi synths and the transitions to gentle sections with a unique ebb and flow. This was huge. Nothing like it was seen at its time, and its popularity, especially back then, attests to its originality.

Arguably, this album really pushed the poppier side of Djent to become more popular and accessible to the majority of its short-lived audience. The electronic components of it would inspire bands to further explore this avenue of instruments used in pop to be integrated into metal. Thus, it’s undeniable that in terms of significance along with charting new territory that bands across sub-genres (Sky Harbor, Wrvth, Scale The Summit, Cloudkicker) further explored, Exoplanet has to be The Contortionist’s album of the decade.

Love it or hate it, you just cannot deny its influence. Black metal was no stranger to melody and emotion. Hell, some of the pioneers of the genre indulged in melancholic introspection which inspired many future bands, within or outside the genre. But that was still mostly in the standard key of dark and brooding atmospheres. Just prior to the release of Sunbather the nascent style of blackgaze tried to write more sincere and vulnerable music, but it was still kind of “cold”.

Then Deafheaven busted the whole thing wide open in 2013. The release was marked by absolute euphoria, with supporters claiming it to be a revolution of the sound and detractors screaming bloody murder over hipsterdom and posery. I don’t think there’s been an album as controversial on a purely musical basis since. But pandora’s box has been opened. Deafheaven showed black metal that it does not need to hide its face from the sun. Blackgaze exploded, unchained from its traditional black metal roots. Many a band in black metal would come to experiment with atmospheres and themes that were far removed from the usual canon.

Despite many still holding resentment towards Sunbather, I contend that it’s, overall, been a great boon to the genre.

The Satanist was released in 2014, five years after Behemoth’s last record. This album also came after lead singer Nergal’s treatment for Leukemia, and it feels like a record made with a renewed vigor for life. This is an example of blackened death metal in its purest form. This album is brutal, evil, and captivating in a way few other records are. The band’s infamous brand of blasphemous writing is present in a glorious force on every song, with hellish music to compliment it. Upon release, it received the type of universal acclaim most albums will never see, and its brilliance is still praised to date. Since 2014 this album has been used as a benchmark for the genre, with countless bands attempting to emulate it. This is easily one of the best records of the decade and amongst the best albums of all time. Comebacks do not get much better than this.

Mgła is known for dark, dismal, and nihilistic Black Metal; their album making our milestone list is the perfect representation of their skill and style. 2015 found the release of Exercises in Futility which was filled with pessimism and vitriol; throwing down the gauntlet for all in the many different takes on the sub-genre. What Mgła does brilliantly here is melding more abrasive and avant-garde facets with their signature gloomy melodicism.
These six songs that make up the album’s forty-two minute, which follow their typical naming conventions, elevate from one to next furthering their hopeless musings. Every second is dripping with despondency fueled anger; incredible drumming, razor-sharp riffing, and distinctive harsh vocals to paint their scenery.
Mgła unleashed Exercises in Futility and the fog rolled in and enveloped us all.

Lately, Batushka has been getting a lot of attention across the internet. The band unfortunately split up in an argument and both guitarist Kris Derph as well as singer Bart Krysiuk claim that the music is theirs. After both sides each released a ‘true Batushka record,’ it caused a lot of people to create meme Batushka-albums, but that’s not the reason Litourgiya deserves a spot on this list.

Back when it came out in 2015, it had a great impact on the metal community. It was a black metal album with Eastern European orthodox liturgic elements, presented like a mass. Soon after release, the album already had over one million Youtube views, which is a tremendous amount for an underground black metal record. The band signing with Metal Blade in 2017 caused another uproar: they started touring, performing shows that were like actual liturgic masses, and their music was appreciated by metalheads and non-metalheads alike.

And because they started with one low-budget debut album and blew up so big within two years, we definitely think it deserves a spot on this list!

Every once in a great while, a piece of music comes that consumes all of your immediate attention. It is a black hole, refusing to allow your thoughts to deviate from what is going on right then and there, completely absorbed in that world and takes your breath away.

Bell Witch’s Mirror Reaper is that piece of music. Spanning nearly 90 minutes, this single song/album is a funeral doom masterpiece. This piece drags you through raw, pure, and unrestrained melancholy so complete that it will leave you lost in thought long after it’s over. It’s a haunted and tortured beauty captured in this soundscape and reflected in the artwork. Each note, every impact, and all the subtle textures are achingly created from grief that people should never know. The impact this stunning composition is undeniable.

Mirror Reaper is a composition—not a song, a composition—that goes beyond simple entertainment. It demands attention and contemplation; it forces the listener to experience emotion like never before. When the last note fades away, only one though remains: breathtaking.

There’s been a bit of a thrash revival recently. At the forefront of this is bands like Power Trip. While some bands are content to just rehash the 80s for all of eternity, Nightmare Logic helps to bring the genre of thrash metal into the present day with modern production and musical sensibilities while not sacrificing what made the genre great in the first place. Power Trip don’t sacrifice anything, in fact. There are in-your-face aggression, impressive musicianship, and lyrics that range from fun to snarky to bitter throughout the album.

Bands like Vektor are combining thrash with grandiose themes and concept albums. Bands like Kreator are still chugging along, playing their excellent brand of 80s thrash. Bands like Metallica are beginning to remember what made them get into the genre in the first place. And bands like Skeletonwitch are continuing the blurring of genres by playing a brand of blackened thrash that was started by their predecessors decades ago. Power Trip’s Nightmare Logic is like an axe swinging through the center of this mini-thrash renaissance.”

Quite possibly the greatest response to a racist suggestion on 4chan, Zeal & Ardor quickly became one of the most talked about bands in the metal community. Blending an intensely energetic and aggressive black metal with sinister reinterpretations of American slave spirituals, they make you aggressively ask out to the void why this has never been done before.

Starting with 2016’s Devil is Fine, the music of Zeal & Ardor has been telling the story of slaves in the American South embracing the devil instead of Jesus. While Devil is Fine made waves and was excellent in its own right, Stranger Fruits hit the scene like the crack from Nat Turner’s gun, showing that they were more than just a gimmick.

Amongst the likes of Panopticon, Twilight Fauna, Giles Corey, and Nechochwen, Zeal & Ardor are part of a continuous representation of gothic folk art, digging up our haunted and painful past and presenting it to us in all its blackened and aggressive horror. Stranger Fruits influence lies in its ability to show the metal community, especially the black metal community, that there still remain interesting stories to be told and music to create. And you don’t need to follow in the footsteps of Neckbeard Deathcamp and Gaylord, playing the meme-game of White Nationalist’s in the scene to humiliate them out of existence.