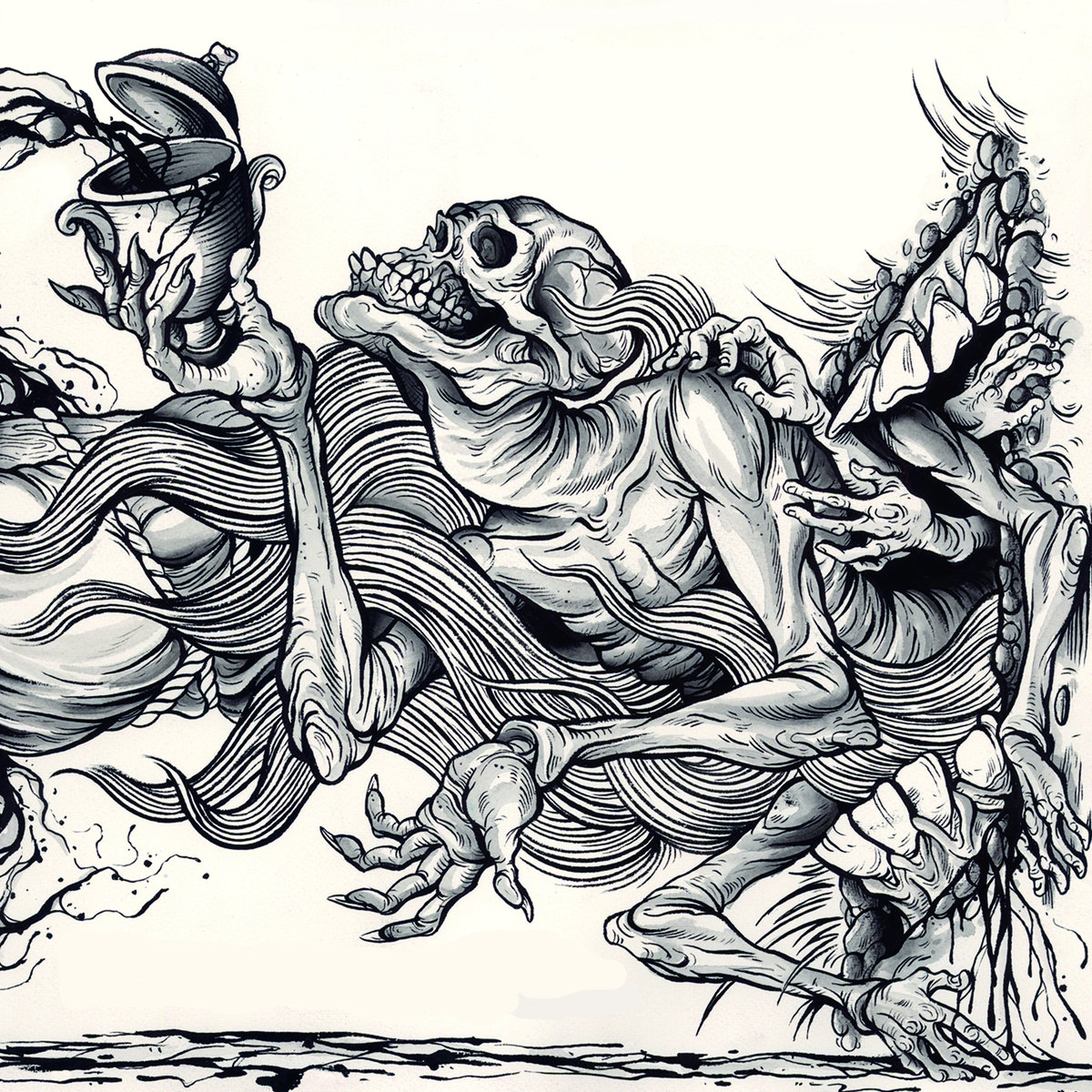 -an infective agent that typically consists of a nucleic acid molecule in a protein coat, is too small to be seen by light microscopy, and is able to multiply only within the living cells of a host.

Zao’s eleventh studio album, entitled The Well-Intentioned Virus, convokes such dark imagery as it draws the listener into a sonic assault rife with caustic annihilation. It’s been a seven year hiatus since the band’s last album Alive?, and fans have eagerly waited for this day. The throes of mundane life have left their mark on the band, and not a single founding member remains, but the current crew has been holding the reigns for some time now. Zao generated considerable attention when they left their “Christian” moniker behind, but in some ways the band hasn’t changed at all. The Well-Intentioned Virus is as dark as albums like the iconic Where Blood and Fire Bring Rest, albeit with somewhat different themes.

I’d like to caution the reader. The aforementioned virus has been running through my veins for some time now, coursing like a fire. While I’d like to be able to leave my bias at the door, there’s also a reality I must face: Zao has consistently been a pillar of my musical life for many years now. I suspect that this is the case for many metalheads who began their journey with a seminal album like The Funeral of God. While I’ve moved on to more varied subgenres, it’s always a pleasure to come back and revisit my metal identity.

No one’s proclaiming it from the rooftops, but there are many of us that have been thinking the same thing: metalcore is dead. It’s hard to point to any specific time and place where it happened, but over the years metalcore has slowly taken a dive, and for the most part it lies vacant and empty, like the baleful eyes of Dr. T.J. Eckleberg that stare down at ruin and woe from atop his billboard in Queensborough (any Gatsby fans out there?). This year, I’ve been pleasantly surprised to lay that theory to rest. First, Norma Jean’s Polar Similar defied trends, and now Zao’s The Well-Intentioned Virus has taken my ears captive.

The album begins with light strokes of ambient guitar as “The Weeping Vessel” worms its way into the listener’s consciousness. It’s immediately obvious that Daniel Weyandt, longtime vocalist, is still in fine form. His guttural, shredding screams have long been compared to Carcass’s Jeff Walker, and while there are some haunting similarities, each is a respective legend in their own right. Weyandt’s vocals sound similar to his efforts on The Fear is What Keeps Us Here, although The Well-Intentioned Virus is a bit more sonically refined than that previous album.

A tight riff from lead guitarist Scott Mellinger shakes up the room with the execution of the title track, and its heavy thrash influence and circling rhythm guitars by returning member Russ Codgel makes this song reminiscent of The Funeral of God era. Musically, much of the album also draws influence from the album Liberate Te Ex Inferis, arguably one of the band’s most underrated works. That album basks in its dark thematic material and groove-laden riffs, which is replicated here.

There are times that are marked by pain, suffering, and loneliness. “Broken Pact Blues” seems to tell of such a time, of when a loved one has passed away. I’m no stranger to such loss, although it has touched many lives much more harshly than my own. The harmonic distortion on this track blends well with the bluesy overtones. There’s a Gojira-like sensibility on “Broken Pact Blues” that’s hard to argue with. Then it’s on to the crushing sequel “Jinba Ittai.” Clocking in under 3 minutes, it follows the archetype of blistering tracks such as “Lies of Serpents, a River of Tears” and “Human Cattle Masses Marching Forward.”

“Apocalypse” marks a turning point in the record. A mid-paced song with heavy influences from Awake?, the track also features extensive, haunting singing by Mellinger. It’s a welcome break from the cacophony of the previous songs, and it also speaks to Zao’s intelligent song-writing. “Xenophobe” cries out for the persecuted and minorities of our times. Jeff Gretz offers some of the best drumming on the album here, and the melodic arpeggio perfectly offsets the track’s middling aggression.

“Haunting Pools” injects the virus beneath the dermis. It’s classic Zao, boasting syncopated riffs that the band excels at. While the singing in the background comes off as a bit forced, it gives the track leeway with its musical direction. “Observed/Observer” has an intriguing introductory structure, but the chorus that is central to the song treads on familiar ground. “The Earth Orbits Around Flat Earth Witch Trials” is not only a mouthful to pronounce, but it’s also an earful to handle all at once. The endearing riff that begins in the bass guitar towards the end of the song is loaded with Southern sensibility. Maylene and the Sons of Disaster would proudly bear the onus of such a riff, and it’s a tribute to Zao’s musical speculation.

After a relentless diatribe, Zao’s closing number, “I Leave You in Peace,” is a bit of a misnomer. The frantic narrator within the song is desperately seeking escape from reality, and it’s unclear whether or not he finds it. The riffing here is memorable, if not quaint, and ends the album delightfully. The listener also gets a glimpse of Zao’s powerful spoken vocals. It’s a gimmick that many bands fail to pull off, but Zao nails it with epic proportions. One feels lifted up to another dimension, sprung high on transcendent thoughts. And as the album begins darkly, so it ends darkly – and rather abruptly.

Zao means “alive” in Greek. The band has returned with confidence and stayed true to its name. The Well-Intentioned Virus is a contender for the best metalcore album of the year. In fact, it may help breathe new life into the hardcore scene. Suddenly, you remember the minuscule replicators dormant within your blood. The virus exults in its new-found freedom; it prepares itself and surges forward in a new effort at rebirth. It’s still there, ready to break out. You’re unsure of its motivation. Can you feel it? You will.