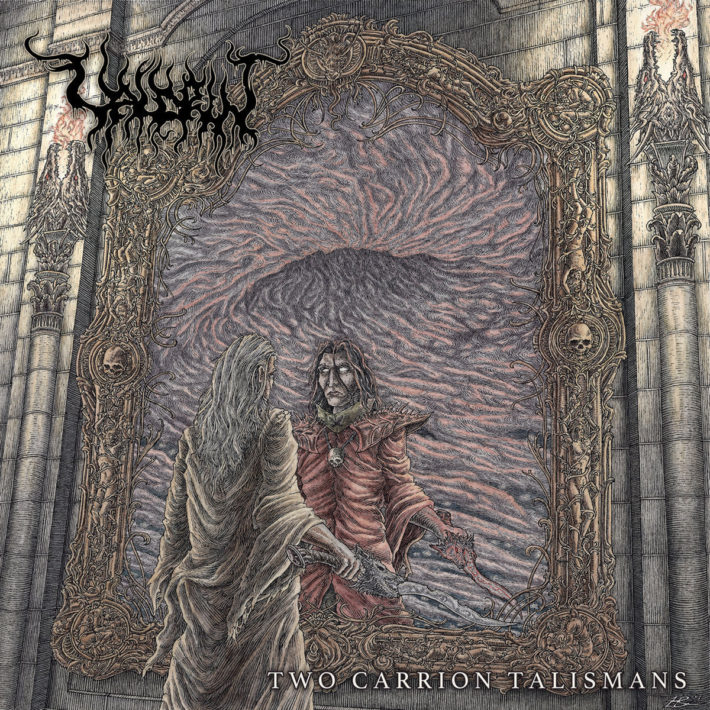 If there’s a distinction to be made between the general music scene and the metal scene, it would be that the turnout rate of new and original material within metal at this day and age is on par with Jazz. Often times, when a metal band releases music that pushes the limits of composition to a new frontier, the album is hailed as a classic and kept on the top shelves of many metal fans. Such examples include Persefone, Porcupine Tree, and Rivers of Nihil. Despite having vastly different sounds and flavors, all three bands have a common denominator; the albums that brought them to the spotlight had reworked song formulas, which gave the album incredible diversity while maintaining the sound that the band was known for.

Valdrin has done the same with their upcoming album “Two Carrion Talismans”. Their impressive debut album, “Beyond the Forest”, hosts a gradual shift from straight forward black metal to a more blackened death metal as the album progresses. The composition varies immensely, and is executed very well. The production is very impressive for a black/blackened death metal album, as the singer’s voice and the snare drum rings and echoes throughout the album with transparently clear quality. The bass and guitars are not in your face, rather they are in the backdrop, letting the listener enjoy the complex and layered melody that Valdrin consistently has in the entire album. For a debut release, Valdrin made it clear that they are a band to watch out for. Does Valdrin’s “Two Carrion Talismans” carry the torch successfully and live up to the expectations birthed from their debut?

Absolutely, and their evolution over the course of four years is a sight to behold. To understand Valdrin’s evolution from their debut “Beyond the Forest” to their second album “Two Carrion Talismans”, one simply has to look at the cover of the album. The cover depicts a figure staring into its reflection. The ugly reflection is wearing a ritualistic dress while a swirling mass of red clouds spins into a black hole behind the reflection. Its as if the figure is staring into an alternate version of itself, one that is grotesque and discomforting. The same thing could be said if the 2014 version of Valdrin looked at its 2018 self. Valdrin’s “Two Carrion Talismans” is delirious, bizarre, and unsettling, yet these qualities are what puts the album in a class of its own.

There is no doubt that “Two Carrion Talismans” is a beast of its own. The listener will first notice that the production is more flat and clear, giving every instrument equal breathing room, which fleshes out the even more complex and dynamic composition. As said previously, the sound of Valdrin now is a very weird and distorted reflection of its past sound, yet it retains the high grade of compositional content with additions. Valdrin gave itself more room to explore diverse melody and riffage, and this paid off. The singer sounds like a very traditional black metal singer, growling in a raspy and ethereal manner. His voice reminds me of an old crone chanting ancient spells, summoning a swirling cloud of black magic and oppression that the Gorguts-esque riffs and progressive composition paints. The occasional use of synths gives the album a haunting flavor, enhancing the mysticism embedded in the music.

“Two Carrion Talismans” is a jawbreaker of an album that continues the Ausadjur mythos that “Beyond the Forest” gave foundation for, telling the story from the viewpoint of the protagonist Valdrin Ausadjur. The listener must be willing to sit through at least three listen-throughs before being able to dissect the nuances of the album. It is clear to me that Valdrin knew exactly which direction to take their composition after “Beyond the Forest”, retaining their theme of magic but escalating it to something hellish and frightening. “Two Carrion Talismans” is a class-act album that brings metal to new heights and possibilities. The ebb and flow of the composition endlessly transforms and reshapes itself with each song, creating an album that is as diverse as the pagan references found in the lyrics. With this album, Valdrin has carved a black metal niche for itself within the metal community, and that niche will continue to grow as bands and new fans alike recognize the ingenuity behind “Two Carrion Talismans”.