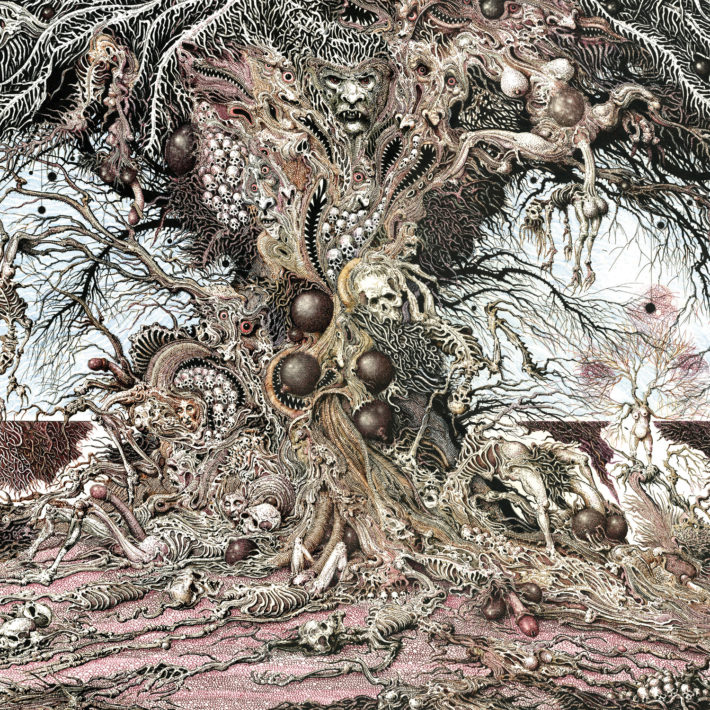 Man, it felt like just yesterday when Ulthar dropped their debut, Cosmovore, which I vividly remember because of that really detailed and disturbing artwork as something like that is really hard to forget, which is great for a band starting out; talk about leaving a good first impression. That artwork is really hard to look away from with how cool and twisted it is, and I didn’t think that they could take their album art game to a higher, even more disturbing yet equally detailed-level but they did exactly that… Providence is Ulthar’s sophomore record, honing on in on that blackened death metal and boy, does this record hit. This album doesn’t necessarily take the genre to new heights, but it just does everything really, really well.

Providence doesn’t fool around at all, as it proceeds to kick you right in the teeth with the opening track, Churn. The following track, Undying Spear opens up with a brief Gregorian chant followed by some swirling riffs on an acoustic guitar before it leads to this combination of black metal and OSDM. Admittedly, this record does take quite a while to warm up to me, as it feels consistent all the way through in quality without offering many special moments. There weren’t too many tracks that did anything different necessarily, but the entire thing is quality blackened OSDM through and through, what more could you want. The riffs are found in multitudes, like on the closer Humanoid Knot for example, or on any song really. This is just an unrelenting aural assault for thirty-six minutes. This album is the equivalent of being repeatedly kicked while you’re on the ground by a group of bullies; each bully being a different track from this record.

The vocals have plenty of variety, from black metal high shrieks to low gutturals obviously found in death metal. Compared to Cosmovore, this record really does focus more on the addition on the blackened elements, with all the tremolo leads and riffs along with the bone chilling screams. I honestly wouldn’t be surprised if Ulthar took it another step further towards the realm of black metal with their next record or even blended in something different into their well-polished OSDM sound. The tremolo leads are asphyxiating in a way that they make the tracks on this record even more evil than they already are. It is astounding that a band of only three members can create something that is so unrelenting and devastating as this record is! Each band member is contributing so much and they’re just killing it on all fronts throughout the entire length of the record. This record is consistently good, that is for sure. I just wish there were more special, notable moments that ultimately draw me back even more to this record.

Ulthar aimed to create an incredibly grotesque record and they most certainly succeeded at that with Providence. This sophomore record is a consistent and solid powerhouse that doesn’t let up for a second until it is over. It gets straight to the point, no lollygaggin. Although there aren’t many special moments found here, it would be inaccurate to say that this record was uneventful at all. Providence is a testament to the talent and vision that Ulthar possess, as they have created yet another disturbing powerhouse of a death metal record.