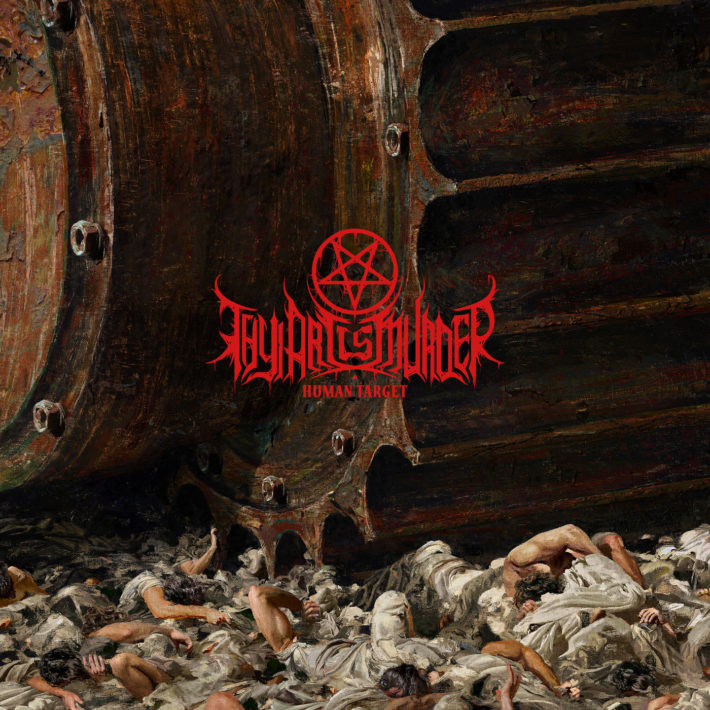 Thy Art is Murder is back with a vengeance carrying the momentum that their previous record, Dear Desolation, had with vocalist CJ McMahon’s welcomed return. Human Target shows that Thy Art has found their niche right on the cusp of deathcore and death metal. This record certainly does not reinvent the wheel in any way, nor does it hold up to Hate, but it is still a solid record to say the least and continues the sound that Dear Desolation had. I hope you have a neck brace handy, because whether you like it or not, you’re going to need one.

Human Target is probably the chunkiest and heaviest sounding record in Thy Art’s catalog, just without the technicality that is present on nearly every song on Hate and Holy War. This latest effort has not a single guitar solo aside from the one on the opening title track and it barely lasts 10 seconds. That is not saying that guitar solos are what make songs good or not, but that complete lack in the sound that TAIM become well known for is only somewhat made up in the monstrously chunky guitar tone and the reliance on brutal breakdowns. Still angry as ever, this record still provides great fuel for lifting weights at the gym and even the most mundane tasks like washing the dishes! Although not breaking any new grounds, Thy Art is Murder sounds malicious as hell!

Once the opening track starts up, you’re made very clear of the insurmountable weight that the instrumentalists will bear upon your weak and feeble ears. It sounds like a nine-string guitar tuned to Double Drop Z is about to absolutely wreck you. The following track, New Gods, will open eerily and suddenly throw you six-feet deep into mayhem. The layered vocal tracks make the vocals on this particular song have much more weight than normal and makes the song much more enjoyable and evil at the same time. Death Squad Anthem will be sure to nearly snap your neck out of place once that speedy breakdown hits. Well, I suppose it is fair to say that all the tracks on this record will slowly but surely break your neck the more you listen. Make America Hate Again is the obvious political stand out track on this record with the incredibly hostile and unforgiving lyrical tone alongside the filthy and chunky riffs that are sure to get stuck in your head. Sadly, the main riff in this track is probably the single interesting and memorable riff on this entire record, as most of what is found on Human Target is your traditional deathcore abuse of the low end of the guitars and bass. The rest is all 0’s and 1’s.

Eternal Suffering drags on a lot longer than it should with its very one-dimensional chugging and lack of an interesting riff. It was surprising to hear this track end on a glitchy, electronic note, as that was certainly not expected from TAIM. That was the only surprise and interesting part of that track to say the least. Atonement brings back some of the underlying sinister atmosphere that is heard on Dear Desolation, although the usage of the word atmosphere is describing it loosely. The closing track, Chemical Christ, is another good example of usage of that atmosphere. Eye for and Eye is the highlight track on this record. This track starts off somewhat slowly with some melodic leads accompanied by McMahon’s powerful vocals and culminates to the earth-shattering breakdown towards the end of the song. The breakdown in this track would be perfect to be covered by the internet sensation, Gun Drummer, as he has covered Reign of Darkness in the past. The snare leading up to the breakdown is exactly what I’d imagine his cover to sound like.

Although not hitting as many high screams as done in the past, vocalist McMahon certainly fits in some disgusting lows that are sure to give you the stankiest of stank faces. The tendency to remain in the mid to low range in regard to the vocals is comparable to the use of simpler, watered down riffs and instrumentation. The brutality and speed behind the instrumentation found on this record is undeniable, but musicianship isn’t defined by how fast you can do a blast beat, let’s be honest. As seen on Dear Desolation, TAIM trim the fat in regard to the wide range of their technical display. On this record, the vocals and instrumentals cut straight to the chase; the chase being watered-down, low-end riffs and mostly mid-range vocals that you’ve certainly heard before. After repeated listens, the songs all tend to blur together given the lack of characterizing features among the tracks.  Each song is roughly three to four minutes of the same undeniably heavy stuff. TAIM perhaps trimmed too much fat off this record, as a healthy amount of fat is what brings flavor after all.

Although not a bad record by any means, Thy Art is Murder continue to bring consistent and bone-crushing jams with Human Target. The band certainly sounds as heavy and as evil as ever, but there are many other deathcore and death metal bands that are making much more unique and interesting music nowadays. Even other deathcore bands that are as huge and as influential as Thy Art, such as Whitechapel, are still managing to put out different, yet interesting music! Human Target shows that Thy Art is Murder is not necessarily willing to experiment but are certainly here to stay the deathcore giants that they are riding the wave of success from their first few records.