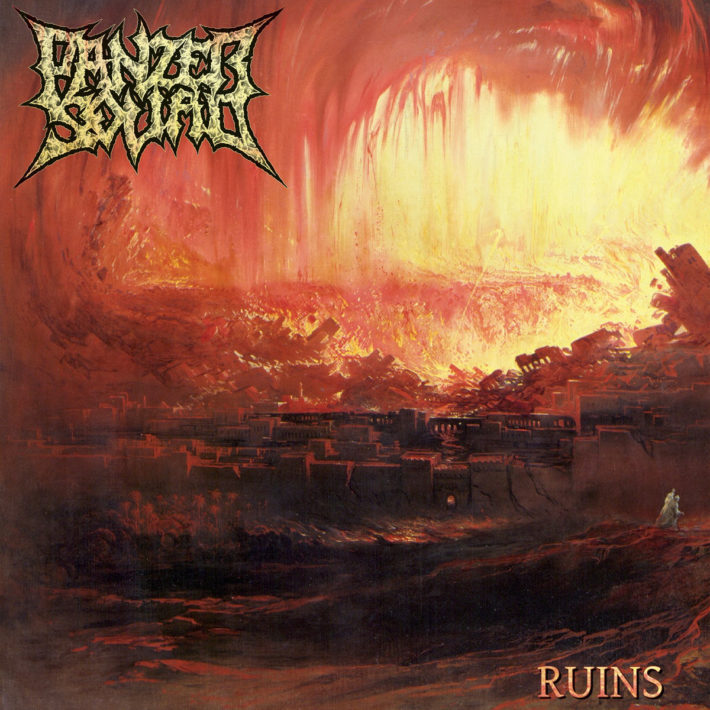 Panzer Squad’s debut album “Ruins” is dedicated to a metaphorical nuclear explosion, symbolizing the spread of political corruption, war, drugs, and tragedy. In short, the self-destructive behavior of humanity is compressed into 39:49 of grindcore, punk, speed metal, and 80’s thrash. Panzer Squad is a band to follow; they have the potential to unleash a blitzkrieg onto the metal scene that would make General Heinz Guderian proud.

Ruins is laid out similar to the chronological order of events found in a nuclear explosion. First, there is the blinding flash of light and heat hot enough to burn flesh off the bone which is what comes to mind right off the bat with the songs “Extinction” and “Death Toll”. The listener is blasted with classic thrash and speed metal with the punk influence that Panzer Squad pushes, all executed with grindcore speed and riffage. Similar to the shock wave that follows the initial flash of a nuclear explosion, “Escapist” follows at a slower pace but as powerful as the first two songs, showing that Panzer Squad’s sound is not a simple reproduction of 80’s metal. With this album demonstrate a sense of direction and purpose that corresponds with the numerous line-up changes starting from 2012 that has helped the band to hammer out kinks from their sound.

After the secondary shock wave in a nuclear explosion comes the mushroom cloud, which rapidly punches through the atmospheric layer and towers above the landscape, ultimately spreading radiation to the environment. Similarly, beginning with “Sewer Rat”, Panzer Squad continues with tight-knit riffage and pummeling drums. Then, Panzer Squad slows down and lets the thick yet crisp sound of the guitar and bass ring, followed by a shredding guitar solo. This song formula continues with “Singular Purpose” highlighting the maturity of Panzer Squad’s music, shown by the fact that they know when and where to give space and slow down to potentiate the menacing vibe that is always present in Ruins.

The mushroom cloud resulting from a nuclear explosion brings with it further destruction. “Shut in” comes in giving the album a much darker sound with minacious chords and rapid-fire riffage. Just like an observer becomes more horrified as the mushroom cloud increases in size, the album becomes darker and more frightening with “Victims of War” and “Delusionist”.  “Delusionst” is definitely the highlight of this album, as every great moment in Ruins can be found within this song.

Finally, as humans would experience the radioactive fallout raining down from the sky, poisoning the desolate landscape, “Approaching The End” slows the album down and amplifies the hopelessness laced in Ruins. The sheer destruction of a nuclear explosion is experienced with “Zombie Shot” and “After The Bombs”.  However, the last song in the album, “Warsystem”, is unnecessary and distracts from the album, degrading an otherwise excellent listening experience.

Panzer Squad successfully avoids over-production in this album that plagues modern metal. The dry and natural tone of the drums evoke the 80’s metal vibe that Panzer Squad expresses in their album. The guitars and bass are thick and work in tandem, contributing to a formula that generates moshpits found in metal concerts. The singer’s growl is ugly and raw, a compliment to the sound of the band.

As a debut album such as Ruins, Panzer Squad successfully demonstrates that they are a war machine not to fuck around with. I am impressed by the variety of riffs and breakdowns produced by Panzer Squad. This diversity in sound gives this band the ability to paint a detailed sonic landscape of annihilation as aptly shown by the cover art of the album. Ruins is a must listen for fans of metal across the spectrum. Panzer Squad is a band to watch and follow, with this impressive debut album that has the potential for musical growth in this genre.