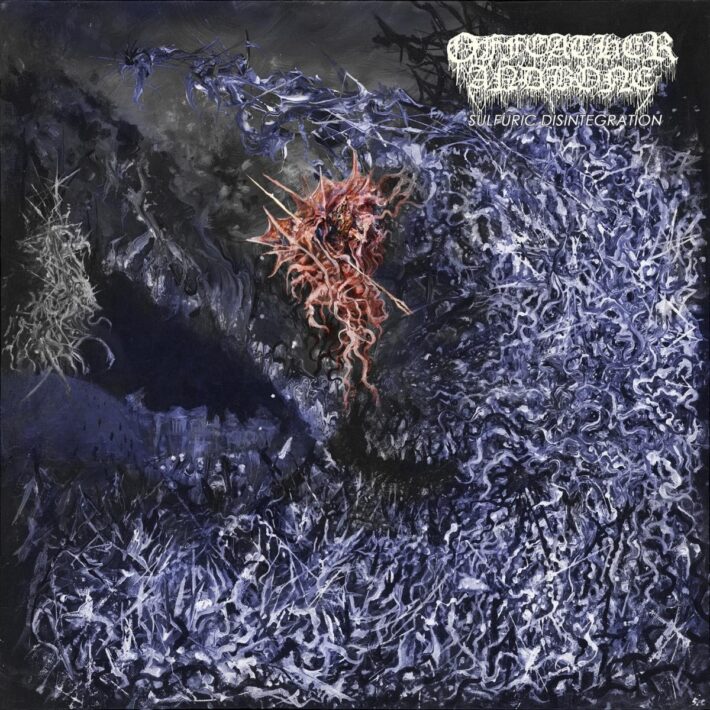 There are two types of bands in this world, there are bands, such as Obituary and Slayer, who find a sound that works for them and stick to it. Then there are bands like Death and Gorguts, bands that are never content with making the same album, always looking to improve and grow outside of their comfort zone. With their third full length album, Sulfuric Disintegration, Of Feather and Bone prove that they are not a band willing to remain stagnant and will continue to grow and evolve with each release they put out.

Of Feather and Bone are, yet another, extreme metal band out of Denver, Colorado, who, along with Blood Incantation, Primitive Man, and a slew of other bands, are putting the city on the map as one of the best hotspots for extreme music of the past few years. Combining elements of sludge and grindcore into their signature brand of death metal, Of Feather and Bone have truly made a name as one of the genres most eclectic and interesting acts. With each release the band continues to expand on their sound and this album is no exception with the band continuing to lean more heavily into the pure death metal sound each time out. Sulfuric Disintegration, is the band’s first release since the highly acclaimed Bestial Hymns of Perversion, and their second release on Profound Lore Records, a label that may be incapable of signing a bad band. While hype can often be hard to live up to, Of Feather and Bone prove that they are up to the task and Sulfuric Disintegration might be their best work yet.

Upon first listening   to the album, one thing stands out over the previous works is the production. Sulfuric Disintegration boasts a full and oppressive sound quality that is a step up from their last album without ever sounding overproduced or sacrificing atmosphere. In addition to the production, the band has taken a leap forward in terms of songwriting. Across the six songs on the album, not a moment is wasted. The album is lean and mean and never lets up. While all the elements of previous albums are present on Sulfuric Disintegration, the quality of the elements is taken up a notch. Leaning more heavily into the death and grind elements and dialing back on the doom and sludge, this is by far their most aggressive album yet and, as a result, their most enjoyable. This album is truly great. The riffs are amazing, the songs are inaccessible yet catchy somehow, the vocals are oppressive, and it sounds disgusting and terrifying in all the best ways. Bestial Hymns of Perversion, was not an album that I thought the band could top and I can honestly say that they blew it out of the water. The songs are infectious and get stuck in your head. The grind elements are phenomenal and the death metal elements can rival some of the greatest that the genre has ever seen, call me crazy but I hear Once Upon the Cross era Deicide when listening to this album.

Of Feather and Bone have created another album that continues to show that they are among the best extreme metal acts around. 2020 has been an outstanding year for death metal albums and this may be the best one so far. Of Feather and Bone are criminally underrated and more people need to hear what these guys have to offer, because it is something unique and of extremely high quality. Hopefully Sulfuric Disintegration is enjoyed by others as much as I enjoy it and continues the band’s ascent through the death metal ranks. I have a feeling that this one may end up on a lot of lists at the end of the year. Do yourself a favor and pick this one up, you will not be disappointed.

Click here to visit Of Feather and Bone’s bandcamp