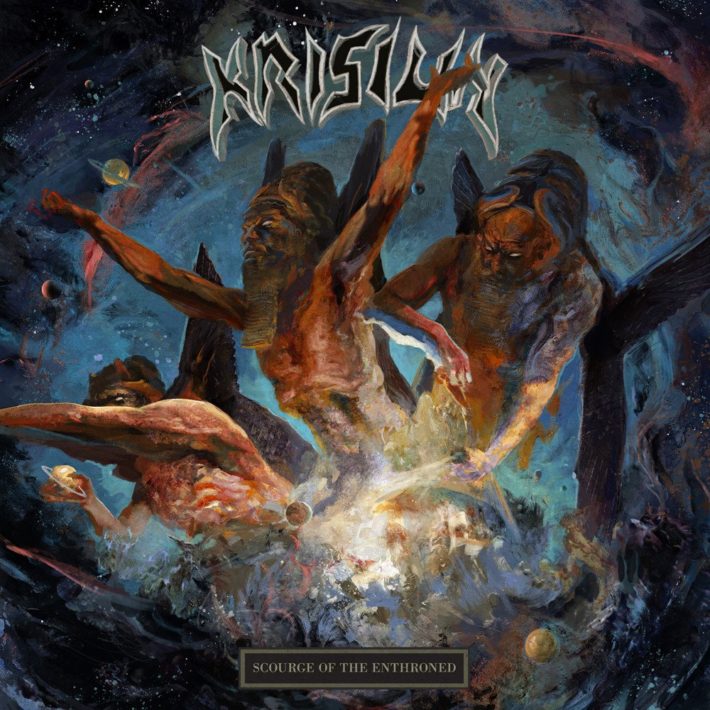 Krisiun is a veteran death metal band hailing from Brazil. Since 1995, Krisiun has released 11 albums over the span of two decades. Their first four albums sound exactly the same; the drums are blisteringly fast, the guitars and bass play at roadrunner speeds, and the production is mechanical and void of natural sounds of the instruments. In 2006 their album “AssassiNation” was dropped. In “AssassiNation”, every note and sound can easily be heard thanks to a substantial improvement in production. This gave the band a lot more depth to their music, making the intricacies of Krisiun’s music a lot more present to the listener and enhancing the overall experience of the album. Krisiun continued their growth with their later albums, making their riffs much more melodic and introducing a variety of tempos within songs.

Last week, Krisiun released their eleventh album “Scourge of the Enthroned”. Just like how Intronaut’s “The Direction of Last Things” coalesced their previous three albums into a juggernaut album of progressive death metal, Krisiun does the exact thing with “Scourge of the Enthroned” except with their entire discography. For a veteran death metal band who knows how to generate hard-hitting riffs, this album is a monster. Without a moments hesitation, the album shoots off at mach 5 with the title track and continues to pound the listener relentlessly with their typical style of drumming and guitar/bass riffs, except it’s all been kicked up a notch.  There’s no doubt that “Scourge of the Enthroned” is Krisiun’s heaviest album to date. Filled to the brim with rage and fury stemming from the current political atmosphere, this album is rank with outrage and Krisiun is definitely not shy to demonstrate their feelings. With that being said, it is unfortunate that a veteran band took twenty-three years to produce a stand-alone album that’s as detailed as the cover art. Despite the time it took for Krisiun to create an album such as “Scourge of the Enthroned”, it’s definitely an entertaining listen. The speed and intensity that Krisiun plays at slightly breaches the realm of tech death, but satisfyingly they don’t ruin their raw and uncut aggression with unnecessary electronic breaks or finishes. There are some odd-time signatures that can be found in the latter-half of the album, providing appropriate progressive breaks to the otherwise straight-forward death metal.

As said previously, much of this album focuses on the political climate and current events. Although the beginning tracks focus on Babylonian gods looking down and casting judgment onto us humans, the rest of the album focuses on the strife that plagues humanity to its deepest core. “Devouring Faith” addresses the hate and bigotry that can be found on all corners of the planet, unapologetically showing Krisiun’s attitude towards the so-called “faith” that many follow. One benefit of veteran bands that have little line-up change is that the focus becomes singular. This is present in the song “Slay the Prophet”, which easily is the highlight of this album due to how well it paints a sonic picture of marching bigots lynching intellectuals.

All in all, this album is satisfactory and shows that Krisiun has really stepped up their game in terms of musicality. Although nothing new is done, “Scourge of the Enthroned” is a tale of the scourge left in the wake of those who enthroned themselves to this world, or however you choose to interpret this metaphor.  The fury is ever more present. However, after multiple listens the album begins to blur into one gigantic angry song that’s filled with deceptively varied riffs and formulas. Listen to this if you want to pump iron and break the barbell, but don’t expect anything new.