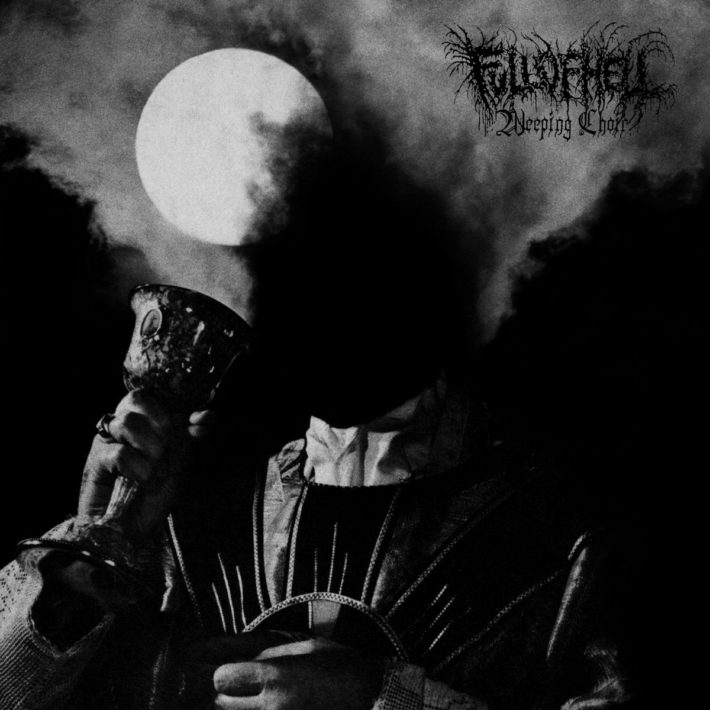 As a teenager with a jazz saxophone background, I learned to respect the way music can integrate with different parts of itself which often leads to the creation of new genres and sounds. As my music taste became more accustomed to dense and claustrophobic metal of all subgenres, my fascination with metal began to grow exponentially. Metal as a genre of music explores atonality and heaviness, a territory of music that we are far from reaching the boundary of. Nothing pleases me more than when I listen to a new band and find a creative spirit that stands strong in the face of mainstream music that’s beaten a dead horse one too many times (I’m looking at you trap rap).

Full of Hell is an example of a band that has carefully nurtured their sound by melding it with other influences in the atonal world of music, and doing so masterfully. They have spent numerous years putting out EPs and working with master class abstract and avant-garde artists such as The Body and Merzbow. Their collaborative album with The Body, One Day You Will Ache Like I Ache, sought to investigate the uncharted territory of atonality, and did so brilliantly. One Day You Will Ache Like I Ache stitched together the acidic and claustrophobic sound of Full of Hell with the abstract and electronic concepts of The Body and established a new frontier. I personally was very excited after hearing this release because I knew Full of Hell was going to integrate this new frontier into their next album. This inference turned out to be correct when Full of Hell released Trumpeting Ecstasy, which turned grindcore upside down in a brilliant manner. Appropriately paced and having the perfect runtime, Trumpeting Ecstasy proved to be a brilliant album that was rank with the political and social anger present in 2017. Here, Full of Hell refined their recipe for a delightful listen, knowing the exact ratio of relentless riffage and drumming to slow and pounding chugs that would leave Los Angeles reeling more than from any earthquake. Somehow, while laying down quite possibly the heaviest and brutal grindcore album since Wormrot’s Voices, Full of Hell maintained tasteful guitar riffs and bass lines that enhanced both the heaviness and the atmosphere of the album, all while providing enough variation while being pleasantly satisfying. In short, Trumpeting Ecstasy catapulted Full of Hell into the mainstream with very good reason.

With such an impressive album, many longtime fans such as myself were left wondering ‘what’s next?’ Full of Hell dropped a WMD on the metal scene with Trumpeting Ecstasy, and there was not much to find in their aftermath. But I should warn everyone that compared to Trumpeting Ecstasy, Weeping Choir is the wall of fire from a supernova; there is no hiding from this album anywhere in the world and it will annihilate you. With unwavering confidence, I can say that Weeping Choir is Full of Hell’s act of comfortably seating themselves upon the iron throne that rules the dense and claustrophobic territory of metal. It is clear to me that Trumpeting Ecstasy drew Full of Hell asymptotically close to the boundary of what we consider heavy in metal, but Weeping Choir blows past that boundary and acknowledges the limitless of just how heavy and good Full of Hell will get.

It’s not enough to say that Weeping Choir does everything that Trumpeting Ecstasy did better, because that doesn’t capture just how good this album is. The production is cleaner and more crisp, allowing the listener to realize just how much they have sunk into hell itself. Every guitar note and cymbal ring is clear and distinct, the bass end of Full of Hell’s sound is more substantial. And the vocals, oh god the vocals. Expect your face to melt from the sheer acidity of Dylan Walker’s unique and addicting punk-esque scream while Sam DiGristine’s harsh low-ended growl is the sledgehammer that breaks your skull. Interchanging wonderfully, the vocalists are sure to deliver potent vocals that are never overdone.

Weeping Choir wastes no time and starts of fast and strong with Burning Myrrh, displaying the enhanced intricacy of Full of Hell’s riffs. About half a minute in, one comes across a very Portal-esque tremolo of guitars, which alerts the listener that Full of Hell is borrowing from even more artists and doing so with grace and intelligence to extend the magnitude of Weeping Choir. Thundering Hammers quite possibly has the most addicting riff of any metal song for 2019, and is sure to be a popular single. Then, out of nowhere, Rainbow Coil comes in, bringing with it the strange and obscure electronic drums coupled with noise that is very reminiscent of the opening track of One Day You Will Ache Like I Ache.

Did I mention that I fell in love with the collaborative album One Day You Will Ache Like I Ache? If not, it’s because of the unique blend of electronics and grindcore The Body and Full of Hell bring to the table respectively. Trumpeting Ecstasy showed for just a moment the influence left behind by this collaboration, but I was left discontented and salivating for more. After pummeling the listener with their signature speed and heaviness, Full of Hell holds their frantic energy and allows space for the electronic grace of Lingua Ignota to really shine. After so many collaborations, I am left dazzled by just how well Full of Hell can mold their sound to practically any artist within the realm of the atonal and abstract. Without a doubt, the song Armory of Obsidian Glass brings to new heights the sheer dread Full of Hell is known for unleashing, and I am excited to see where they go with this idea in future albums. But fear not, Full of Hell returns to their signature sound, dropping what quite possibly is their most crushing song to date, Silmaril. Coming out of nowhere, a Cannibal Corpse-esque vocalist stomps on the listener with a classic death metal chug and drums. I won’t spoil the rest of the album because the twist and turns Full of Hell brings with this album are so unexpected yet are executed masterfully. All I’ll say is, prepare for some squealing saxophones.

So what is there to take from this review? I’ll just say this; grab a copy of Weeping Choir as soon as you can, because you will be in a ride of your life. Weeping Choir is without a doubt an AOTY contender, and Full of Hell shows no signs of slowing down.