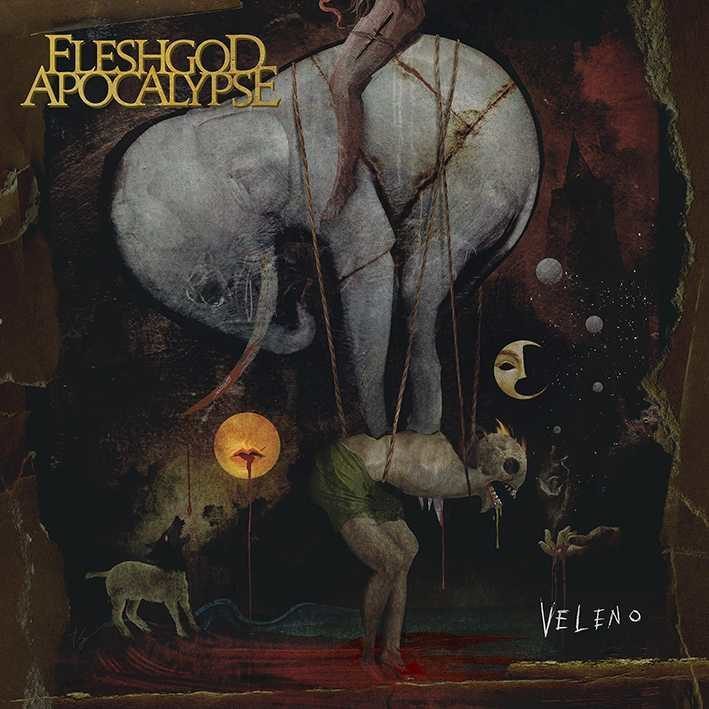 When considered, it is undeniable that both metal and rock has very deep roots in classical music. It would be a fair assumption to assume that the majority of well known guitar solos within rock and metal follow the same structure and chord progression as some past classical composition. Being a study of how to organize music to sound pleasant, intriguing, and cohesive, the argument that having knowledge of classical music and composition gives a band enhanced structure is most certainly sound. My go-to example of a band that demonstrates this tendency wondrously is Yes Their music is structured, organized, orchestrated, and damn good. Each musician brings with them a proficient background in classical music, and are very good musicians to begin with. The same can be said about legendary symphonic death metal band Fleshgod Apocalypse, a group of musicians from Perugia, Italy, who retain the same excellent qualities that made Yes such a good band. I got my first taste of Fleshgod Apocalypse when they released King, which brought to my attention a blend of classical composition and technical death metal licks and riffs. Compared to their earlier albums, King explores just how far one can blend classical music with death metal, and does a fantastic job demonstrating that this is a potent combo.

Technical death metal retains very stark similarities to classical music, whether it be chord progression or melody. I challenge you to count how many licks in Archspire’s Relentless Mutation could be transposed into a violin part and integrated into an orchestra. King makes these similarities ever the clearer, and does so in a bombastic and fantastic manner. After listening to King for the first time, I was left feeling like I just finished watching a compilation of Richard Wagner’s music being played in an orchestra hall. It was sheer magnificence and pure entertainment. There was never a time when listening to the album where I felt bored, and that speaks volumes in itself. Complex melodic interactions are to be heard in and between nearly every layer of Fleshgod’s music, whether it be the drums in relation to the violins or the interaction between the guitar and kettle drums. King also demonstrated how good Fleshgod is at arranging vocals, whether they are clean, screaming, or growling. My whole point is, listening to King is like watching the most bombastic of classical concerts live anyone could find. After three years and some significant lineup changes, does Fleshgod’s new album Veleno retain the level of excellence we all have come to expect from a Fleshgod album?

I am confident that listeners across the board will not only find that Veleno does not disappoint, but that it continues and expands the territory King introduced. If King is the bombastic orchestra that just played live, then Veleno is the dark and visually-striking Shakespearean play that earns a Tony Award. It is no wonder that Fleshgod has been continually exploring and extending their core sound, as it took years to cultivate the concept of what Fleshgod aims to display to the listener. Akin to how a parent eagerly marks the height of their child on a wall, I was able to chart the progression of Fleshgod’s sound from Oracles to King, seeing their music grow to be even more classical-sounding and epic. With Veleno, Fleshgod took a step back from composing Wagner-bombastic music. One will find that the classical-side of Fleshgod is not shoved directly in your face, rather it is blended more into their tech-death sound and constructs a meaty foundation that enhances the album. It seems that Fleshgod has built the classical composition around the death metal instead of the other way around here in Veleno, and that is what makes this album an enjoyable time.

This album kicks off on a strong note with the song Fury. In my opinion, this song encapsulates the sound that Fleshgod is trying to go for in this album. The classical arrangements are there, the piano is still in the backdrop, and the violins can still be heard, but again it’s built to be integrated within instead of around the death metal. This serves to enhance the technical death metal even more than what was showcased in King. With kickass riffs, guttural vocals, and a blisteringly fast tempo, it is made clear to the listener that Veleno is going to be one fast rollercoaster of a ride. Carnivorous Lamb comes in swinging strong beginning with bagpipes, violins, and a sweeping guitar that gives the listener a very narrative flavor, one that surely can be tasted in the rest of this album. After a filthy head-nodding breakdown, the song clears space and gives enough room for quite possibly my favorite bass line of any metal song to echo and satiate the listener’s ears. Sugar continues the narrative theme with some neoclassical riffs that are played by the guitar and the piano. Fleshgod makes sure to dispel any rumors that they have abandoned the epic sound they so adequately demonstrated in King. After a little break from the intensity of Sugar, Monnalisa follows up and really shows us what makes this album so special. Once again, it is made clear that Fleshgod’s choice of making the classical sound of their music more subdued, subtle, and restrained only strengthens their sound and makes the music that much more enjoyable to listen to.

After this, Worship and Forget comes around and continues the narrative Shakespearean quality that was established earlier in the album. At this point I really did feel like I was an audience member to an epic play being shown at Broadway rather than viewing an orchestra concert. Then out of nowhere, the weirdness of Absinthe serves to only enhance the play-like quality of Veleno, and does so magnificently with varied vocals and a tumbling violin section. Keep listening and you’ll encounter a delicious breakdown followed by my personal favorite guitar solo on this album, backed by sweeping piano lines. Following this song is Pissing On The Score which sounds very similar to Fury. As professional musicians do, Fleshgod maintains an appropriate pace and takes their foot off the gas pedal with The Day We’ll Be Gone. Here, with a slow and steady pace, female clean vocals are paired with the grand and guttural growls that are sprinkled ever so appropriately throughout Veleno. This is easily the most tasteful song out of Fleshgod’s entire catalogue, and stands to be a testament to how much this band has matured over the last decade or so of their existence, as it continues the subdued epic intensity that Fleshgod has excellently portrayed. The album then comes to a close with Embrace The Oblivion, a wonderful closing epic that stays true to the sound of Veleno, all while continuing the entertaining elements of the sound of Fleshgod. This seamlessly transitions to the closing piano outro, that being the title track Veleno.

And thus, the grand and operatic play has come to an end. The audience is left cheering and lauding the cast members of Fleshgod. The critics employed by New York Times are already scrambling to their hotel rooms to immediately write raving reviews of the play Veleno. Being chalk full of delicious and diverse guitar riffs and solos, with vocalists committing to their clean and growling craft in a most magnificent manner, with drums that tastefully fitting in as a backdrop at any given moment, accompanied by a fast bass that supports every guitar note, and with an updated integration of classical elements, Veleno is Fleshgod Apocalypse’s best album to date. Listeners will find this album very easy to get through in one sitting and will find themselves wanting to go another round. Give this damn album a Tony Award already.