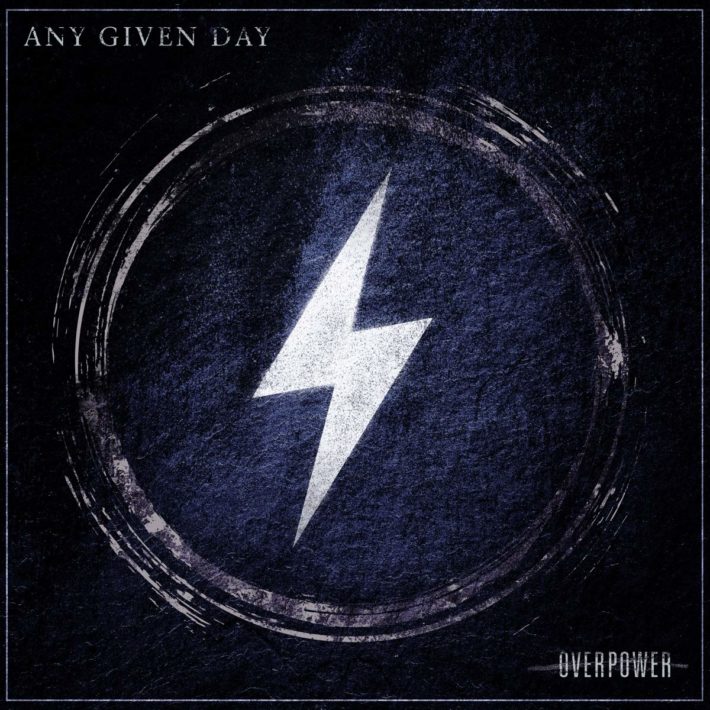 It is always funny in a weird way to see metalheads of all subgenres all come together to unite in their shared hatred for metalcore.  Many of their claims can be true regarding metalcore, more often than not, being uninspired, generic, and overall just bland, but there are many bands that prove that generalization hugely incorrect.  I am one of those ‘metalheads’ that will defend metalcore by saying it’s not all generic; most of it is, but not all.  After listening to Overpower by Any Given Day, I concluded that this band is the definition of cliché metalcore.  Overpower has its moments here and there and it makes me feel beyond embarrassed for sticking my neck out and defending metalcore.  Generic and lackluster metalcore will for sure grant Any Given Day commercial success but the staying power of their music (the lack thereof to be more specific) will only make them another grain of sand in the desert that is bland music.

Let us start off by talking about the highlights of this album; vocalist Dennis Diehl has some pipes.  Most metalcore bands similar to Any Given Day usually have the harsh and clean vocals split among two vocalists, but Dennis clearly shows his vocal prowess throughout the songs on the record.  His harsh vocals are thunderous and are quite intelligible and significantly contribute to the dastardly heavy parts of the songs.  His cleans are on the deeper side of the spectrum when it comes to metalcore vocalists, and they sound very whole and provide catchy choruses throughout the entirety of the album.  Dennis’ vocal performance is without a doubt enjoyable, as he goes back and forth from harsh to clean back to harsh with little effort, so kudos to him.  In addition to the pleasant-sounding vocals, the mix is very well done and quite clear, which also contributed to the easy and pleasant listen. The mix is very appropriate for this type of music; it’s be great, mindless music for those pumping some iron.

Although the vocals sound quite angry and then pretty (in that order), the songs overall sound resoundingly uninspired.  The opening track Start Over slowly fades in and once that lead riff hits, you just know the rest of this album is going to be the same as the countless other “genericore” records before it.  That first guitar riff on the title track may as well be the flying banner that says “Get ready, you’ve heard this a thousand times before.”  Nearly every song on this record follows the exact same cookie-cutter formula of harsh and heavy verses followed by clean and soaring choruses.  Everything about this record is beyond predictable and is just a slap in the face to all the other metalcore bands who actually give a damn about making memorable, inspired, and truly unique music.  I have zero doubt that this album will generate positive reception, as the catchy and predictable vocals are all it takes to convince many people that this is game changing.  I am not saying that the band themselves are untalented or anything, they are clearly quite proficient at what they do, but each and every listen through made me feel like I was listening to a heavier and slightly more technical version of Five Finger Death Punch or modern-day All That Remains.  If metalcore is ever accepted enough to be aired on the radio, Any Given Day will be the band that will define metalcore as Five Finger Death Punch is to metal unfortunately.  That is not a day that I look forward to, especially with all the other bands out there who make much more artistic and unique music struggling to make ends meet on a day to day basis.

This album is not terrible by any means, there were plenty of moments where I caught myself tapping my foot and giving the slight head bangeroo, but it just truly disappoints me as I thought metalcore was finally starting to come out of its stagnant position, and here comes Any Given Day to prove me wrong with the bewilderingly uninspired Overpower.  There is nothing about this album that is not recycled or uninspired, like seriously, just look at the album title, the album artwork, and even the song titles and then look me in the eyes and tell me that that is not the most cliché metalcore album you’ve ever seen.  This album is the equivalent to Macaroni and Cheese; you can find hundreds of similar and bland renditions of it nearly everywhere and the people who will gobble it up are those who eat nothing but chicken nuggets and similar plain foods… I will end with the main lyric from the closing track (and also from almost every other metalcore record): “middle fingers up, don’t give a fuck about what they say.”