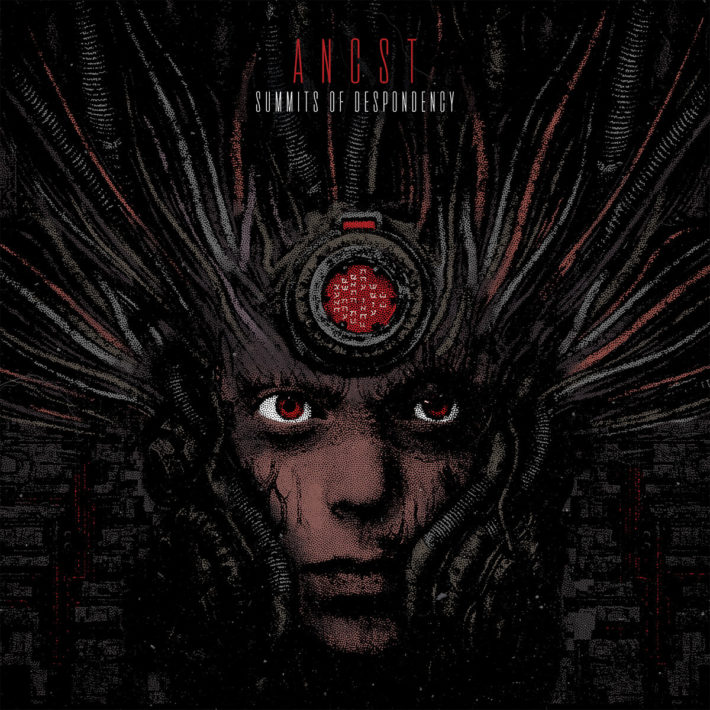 There are two schools of thought when it comes to extreme metal these days, you can either revive an old sound and make it your own, or you can innovate and try and break the mold. With their third album, Summits of Despondency, Ancst has made it apparent that they are not content to rest on their laurels, and put out a genre blending record that speaks to the times that we are living in these days. 2020 has been a pretty shitty year and this album is pissed off enough to truly sum up the feelings that many people are experiencing on a day to day basis.

Formed in 2011 in Berlin, Germany, Ancst put out about a dozen releases prior to releasing their debut album in 2016. Having started as a studio only project, the initial released spanned genres from black metal to hardcore to dark ambient before the band finally found a way to blend these sounds in a way that was uniquely Ancst. While black metal and hardcore have become commonplace in the underground, usually creating a raw black metal sound and incorportaing crust inspired guitars, Ancst have been able to create a much more clean sound than most of their contemporaries with production quality that borders on that you would hear in most metalcore projects.

Summits of Despondency continues the trajectory that the band has been on since their debut with black metal infused hardcore that focuses on social issues. The overall sound feels like Disfear with blastbeats, the vocals even sound a lot like Toompa in both tone and cadence. On first listen, the main stand out was the musicianship, the drumming and guitar playing perfectly match the aggression of the lyrical concepts on the album and all of the instruments are played at the highest level. Despite the clashing genres that are, at times, being presented at the same time, the sound is never disjointed and the music flows from sound to sound with ease. Additionally, the lyrical content is a highlight on this album. The content is angry and aggressive and speaks to the anti-social, anarchist mentality that punk and hardcore are known for.

While I initially really enjoyed this album, unfortunately, the more I listened to it the less interested I became and the more I found myself skipping songs. Upon multiple listens one thing became painfully apparent, this album is derivative. Despite singing the praises of Ancst for their ability to seamlessly blend genres, the band has not really made any of these sounds their own. When you put them all together it is something unique but when deconstructed, it’s easy to see exactly where each influence was taken from. While I don’t think that this would be a problem for most people, something about this took me out of the album, which is a bummer because I really want to like this album more than I did. I think that the band was ambitious but just missed the mark.

I went into this album completely blind, having never heard this band before, and while I didn’t dislike the album, there isn’t much here to bring me back. I do, however, think that this is an album that a lot of people will like. If you like metalcore or deathcore this is definitely something I can see you getting into. Hell, maybe Ancst are creating a new sound called Blackcore. I think that this is a band with a ton of potential, they just haven’t lived up to it quite yet. I’ll be keeping an eye out for what Ancst does in the future, for now I will just keep my black metal, 90’s hardcore, and At the Gates separate.